MUSIC REVIEW OF THE DAY: THE DOORS - 50th ANNIVERSARY REMASTER 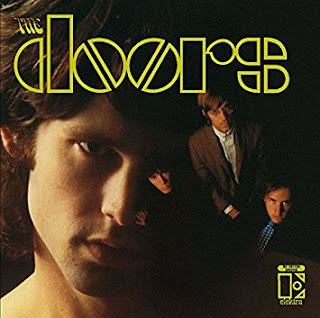 It's hard to remember what The Doors were like before Jim Morrison was turned into a caricature, a drunken, raving, tortured dead poet. But that's how persuasive the biographies, and of course Oliver Stone's movie have been. The image is everything, the music there to back up the stories.


There was a time though when The Doors were the powerful equivalent of, say, Nick Cave, only with really big hit songs. Fifty years ago the L.A. group was leading the charge to make rock and roll not only dangerous again, but with university-level thinking as well. It was a heady mix of blues, radicalism, and English lit. Sure, Morrison was a rebel and self-destructive, but he and his pals had a great idea too, and it was at its best on their self-titled debut.


There's still a touch of pop music here, with I Looked At The Night holding onto a bit of British Invasion, and Light My Fire a resounding hit. But imagine the kid who bought this album based on the latter tune, a number one hit, and getting blasted with Break On Through as cut one. And by the time the album finished, with Morrison yelling about wanting to kill his father and suggesting something worse for mom, the teenyboppers had grown up a whole lot. It was a tricky intensity to keep up, and Morrison would cross into self-parody several times in future albums, but at this point, it was the scary alternative to the Summer Of Love. The Beatles were pretty happy doing Sgt. Pepper, the Stones had no concept of hippydom, failing with Their Satanic Majesty's Request, all the San Francisco bands were stoned, and Dylan was hiding in the basement with The Band. The Doors owned a lot more of 1967 than they are remembered for these days.


You have a couple of options for this 50th anniversary. There's a box with three CD's, the first a remastered stereo version of the album, the second mono, and the third an eight-song live set from early '67, plus there's a vinyl copy of the album, and a big old book for $70. You can buy the vinyl, always nice, or get the remastered stereo CD, which does sound very solid, big drums and that famous organ cutting through all the time. What impressed me most though was realizing how strong their first disc remains.
Posted by Bob Mersereau at 5:33 PM