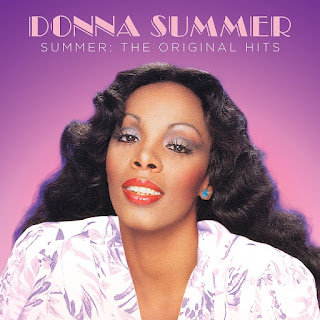 I needed something to keep me awake while driving back from the East Coast Music Awards in Halifax, an extra long trip due to the detour around the flooded Trans-Canada in New Brunswick. I figured Donna would be lively enough, although I probably looked odd singing along to Love To Love You Baby, bobbing my head to the relentless beat. It was quite a run for Summer from 1975 to 1983, with a great run of hits, which saw her move from being the queen of disco to a revered singer, enough of a diva to team up with the biggest singer of the day, Barbra Streisand, for 1980's #1 hit, No More Tears (Enough Is Enough).

Not all the chart numbers are here, as Summer jumped labels a couple of times, and early '80's tracks on Geffen, including the Top 10 hits The Wanderer and Love Is In Control weren't available. That's no great loss really, as the much better cut from a couple of years later, She Works Hard For The Money, does make it, and it leaves room for some deeper album cuts like Pandora's Box, and the European hit I Remember Yesterday, which was a retro-'40's theme crossed with a disco beat, from the concept album of the same name by producer Georgio Moroder. At first Summer was merely his vocal muse on these '70's singles and albums, with such smashes as I Feel Love, and several disco concept sets. But after the huge success of Last Dance in 1978 from the Thank God It's Friday soundtrack, Moroder realized Summer had attracted a bigger audience the simply the disco crowd, and the team switched to more pop-friendly, big vocal numbers, including the remake of MacArthur Park, Hot Stuff and Bad Girls, all #1 hits.

The more Moroder's Euro-disco was dialed back, the more Summer stood out as a singer. Like the Bee Gees, the other huge disco stars, even though they dominated that era, we always remember them as multi-genre artists. But also like the Bee Gees, Summer was penalized for being a disco star, as her career dropped off later in the '80's. Too bad, it seemed like she was really just coming into her own.
Posted by Bob Mersereau at 12:32 AM