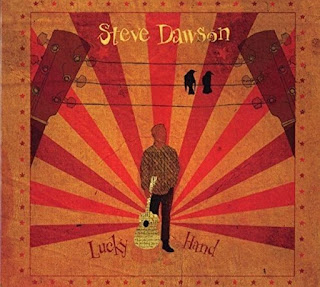 Here's my take on instrumental albums. Generally, I find they don't have much variety. I'm not talking jazz here, or classical, I mean those occasional releases by guitar pickers, made for fans of guitar playing, who know their way around finger-picking and alternative tuning and the like. I still enjoy some of the old rock 'n' roll instrumental groups from the early '60's, Booker T. and the MG's, surf music, Duane Eddy, they all had novelty, and usually you were only sticking around for a song or two. But stick an acoustic guitar album on, and I'm bound to lose interest and fade out.

Unless it's Steve Dawson. Superlatives abound for his playing, and I'm sure there's plenty to rave about here for you fans of guitar. Dawson is also a tremendous songwriter, performer, producer, singer, all those things as well, who records some of the best-sounding roots albums going for people such as C.R. Avery, Jim Byrnes and Christa Couture, as well as his own gems. When he decides to go instrumental, it's time to listen close, because he's going to do something different and surprising, with a theme he wants to explore. In the past he's gone deep into blues, Hawaiian, pedal steel, even rock. This time, it's a set of original fingerstyle and slide guitar pieces, and I guess the best way to describe them is as value-added. In much of the album, the main addition is a string quartet. No mere sweetening, these strings are put to work in full arrangements, prepared by Dawson's old recording partner Jesse Zubot (Zubot and Dawson) doing those honours, along with adding his own violin. And when it isn't the quartet, there are horns and woodwinds, again arranged by Zubot. Meanwhile Dawson is providing all sorts of different textures on various guitars, the effect being a set impossible to date other than post-19th century, with influences and subtleties from all over.

Even pared down to a couple of instruments, the arrangements and movements within the songs are captivating, something to follow intently rather than allow to blend in the background. The strings are dynamic, sympathetic yet proudly following a strong path of their own, with some fascinating note combinations. Of special interest and my personal delight is the appearance of famed Nashville harmonica ace Charlie McCoy, who does just as much exploring on the tune on which he joins Dawson. Anyway, hope I didn't insult too many guitar instrumentalists, but the point is, Dawson makes his album different, fascinating, and very listenable.
Posted by Bob Mersereau at 9:52 PM