MUSIC REVIEW OF THE DAY: THE ONCE - TIME ENOUGH 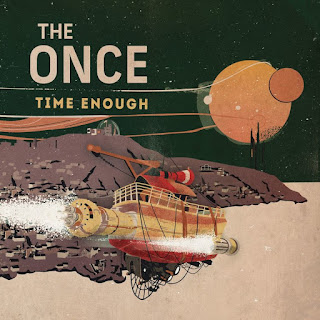 When The Once started out, they were a trad-pop group with great harmonies and lots of personality, a group that made songs sound great. Over the past decade, they have developed as writers to the point that now, they also make great new songs. This is abundantly clear on their new album, Time Enough, which is filled with emotionally powerful lyrics, at times so intense and open you feel the gut-punch like it's your heart that's breaking.

Not only are the lyrics powerful, it's the way they're delivered. Those harmonies and beautiful backing vocals are there of course, but lots has to made about Geraldine Hollett's vocal delivery, clean and clear and relaxed, lovely and powerful. That makes lines such as "I believe you're lying, it's not all in my head, you don't love me," even more striking. In the meantime, this Daniel Ledwell-produced album has plenty of uplifting pop moments, including the Fleetwood Mac-styled lead single "I Can't Live Without You," turning a song about self-image issues for women into one of positive change. As much as we loved hearing the group do traditional numbers like The Briar and the Rose, or their folkie take on Queen's You're My Best Friend, you're now still getting that great sound, plus important new songs as well.
Posted by Bob Mersereau at 8:22 PM