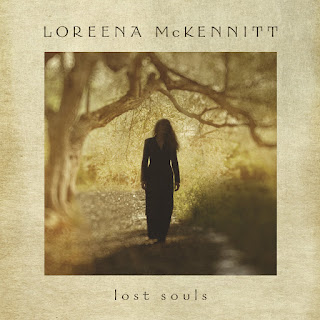 One of the most successful independent artists of all time, Manitoba's McKennitt has sold superstar quantities of albums, some 14 million world-wide, while controlling her own career. A big part of that has been her global touring, which is where she's concentrated efforts for the past decade. Now she's released her first studio album since 2010's Irish-themed The Wind That Shakes The Barley, and her first with new original material since 2006's An Ancient Muse.

The songs on Lost Souls have that unique blend of Celtic, Middle Eastern and progressive world music at which McKennitt excels. The instrumental Manx Ayre manages to take us from some ancient Irish hillside to the bustle of a modern marketplace, with the combination of harp, violin, bells and whistles, her small orchestra weaving these influences back and forth. She's joined once again by longtime associates Hugh Marsh on violin, Caroline Lavelle on cello, Brian Hughes on guitar and bouzouki and lots of fascinating sounds on instruments including the hurdy-gurdy, the Syrian kanoun, and the lyra from Crete. Then the fun is seeing where the players will go with all this ammunition, the sounds and influences and cultures opening up so many roads. The instrumentals here, particularly Sun, Moon and Stars, are lively and imaginative, the best kind of musical melting pot.

Elsewhere McKennitt offers a range of all her styles, including the grand Celtic ballad Breaking of the Sword, first issued last Remembrance Day, a stirring piece about the sacrifice of the soldier, sung by a grieving mother. The title cut is as modern as can be in its theme, the idea that we are losing our moral centre in the rush for progress. She's not alone in this feeling, given the amount of attention she's received by quitting Facebook recently. I have the feeling her fans will seek her out elsewhere.
Posted by Bob Mersereau at 8:44 PM