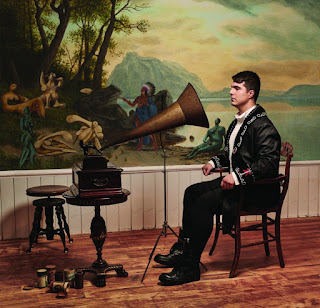 An operatic tenor from the Tobique First Nation in New Brunswick, Dutcher has created a transfixing project, one of cultural significance and artistic accomplishment of the highest order. Working at the Canadian Music Of History, he transcribed a treasure trove of wax cylinder recordings of songs in the Wolastoq language from 1907. He then recorded them anew, building on initial melodies with new instrumentation, blending the traditional with classical and modern pop orchestration. The most powerful parts though are the voices, Dutcher's the most prominent, a rich and haunting instrument throughout, but he's also joined by others, equally powerful.

Dutcher has used some of the original recordings, enough so we can compare, and hear how captivating those original songs were, almost lost thanks to the systemic pressure to eliminate such culture. He's also used a couple of short, important conversations with elders who point out how important it is to bring music back to their people, how art leads the way in reviving communities. These sections are woven into the performances, a narrative that hammers home the huge value, all the while as we marvel at the beauty Dutcher has essentially released.

Artists such as Dutcher have grown up not knowing the artistic scope of their ancestors, and his diligence and passion have lead to us all being able to discover what's been nearly lost. As he says with the release of the collection, "Many of the songs I'd never heard before, because our musical tradition on the East Coast was suppressed by the Canadian Government's Indian Act." Maybe the country has the ears to hear now.
Posted by Bob Mersereau at 7:49 PM