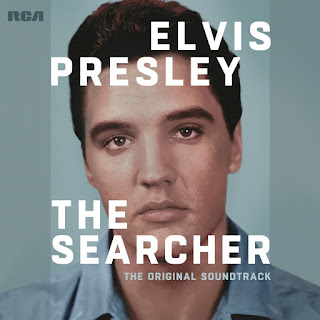 We know he was the King, but in the decades since his demise, Elvis Presley's legacy has been reduced to mostly cliches, jokes and tabloid headlines. Simply put, there are fewer and fewer people out there with actual memories of what he was like and how he changed music and popular culture. This new film by Thom Zimny, best-known for his work as Bruce Springsteen's film and video guy, goes back to tell the story of his influence, trying to get across the depth of his talent. The two-part, three-hour film has been showing on HBO Canada, and also comes with a solid soundtrack.

It's pretty hard to summarize Presley's career in 45 minutes, but the single-disc version of The Searcher soundtrack certainly hits non-stop highlights. It hits the three main themes of the film, focusing on the original '50's recordings, the live comeback special of 1968, and a few of the rehearsals that have come out that show Presley as a dynamo in the studio when he was interested in the material. We get the first Sun Records hit, That's All Right, and the massive international hits Heartbreak Hotel and Hound Dog. From the '68 comeback special comes the Trouble/Guitar Man medley, when Presley came out from the lousy movies and proved he still could rock. The soundtrack digs into some of the lesser-known rare cuts out in the collector's world from the highly regarded Follow That Dream series on RCA, including a rehearsal of Separate Ways from 1972, including the ad-lib at the end when he sings "We should be out by now" at the end. There's also a recording of Nat Cole's Mona Lisa, done when he was in the army in Germany. Again, this is all been available before, but some of it isn't common, so there will be a bit of newness for most listeners.

Hard-core fans can pick up the deluxe edition, which is expanded to three CD's. That one includes a little gospel, some more rehearsal versions, several more hits, and the famous TV duet with Frank Sinatra, a 1960 mash-up of Love Me Tender and Witchcraft. The third CD of that box features a lineup of tracks by others that inspired Presley, including Bill Monroe's original Blue Moon Of Kentucky, Arthur Crudup's original That's All Right, and also Tom Petty (a commentator in the film) and the Heartbreakers doing Wooden Heart, recorded shortly before his death. That alone might be worth getting the expanded edition.
Posted by Bob Mersereau at 8:10 PM