MUSIC/BOOK REVIEW OF THE DAY: LINDA BROOKS - ORCHESTRA IN MY GARDEN 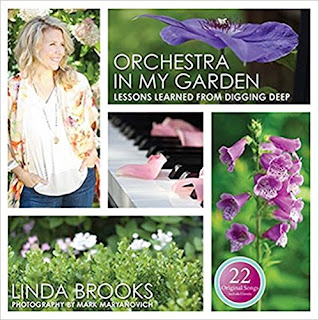 I hadn't heard from Bedford, Nova Scotia's Linda Brooks in awhile, as her last album was a Christmas one, back in 2013. I was wondering where she had been, and as it turned out, she'd been in her garden. While you might think that she was avoiding music being there, as it turns out, all that digging, planting and nurturing was not only inspiring her creativity, it also has led directly to her latest album. And that album is not just music, it's a unique creation that merges her passion for gardening, her writing, and her songs as well. It's a multi-layered project, containing essays, photography and music all inspired by gardening, called Orchestra In My Garden: Lessons Learned From Digging Deep.

The book is loaded with the gorgeous photography of Mark Maryanovich, who is also normally found in the music world, making award-winning album covers and portraits for the likes of Chris Cornell, Elliot Smith and Henry Rollins. Here, he unveils the beauty of Brooks' garden, including dozens of stunning, colourful close-ups. Brooks has written a series of stories that detail her love of gardening, the many years of hard work that she has put into her home garden, and the incredible benefits and wisdom she's gained from the that pursuit. Then, there is a double-album worth of downloads, songs inspired by, and meant to accompany the reading and viewing.

The whole project came about, pardon the pun, organically. Always inspired by working in the garden, she found herself drawn to her computer keyboard after fruitful sessions, exploring her thoughts. She'd also be drawn to her piano keyboard, those same feelings inspiring melodies and more words. Ultimately she realized it was all part of the same project, and as she explains, "In both my songs and my essays, the garden was revealing itself as a metaphor for life."

Interestingly, because of the wide scope of the book/album, you don't have to even be a gardening fan to enjoy it (I speak from experience, or lack thereof). The photography alone is exquisite, calming and captivating in its depictions of the grand scope of nature that can be found in one plot. Brooks' writing is thoughtful and inspiring. She's been able to use all that creative work in the garden to reflect on her own life, how nature gives us the lessons we need in life. Patience, nurturing, trust, success and failure, and final rewards, it's all there, and she relates it to her own life in meaningful ways. She passes on those discoveries not as trite advise, but rather as life lessons granted, and graciously noted. And when she does have advice, it's gardening tips. She's obviously not just passionate, but successful at it too. Yet she offers her tips humbly, and doesn't talk down to newcomers. It's good, sensible stuff: Find the right hat, be patient, start small, work on one space at a time.

As fits the mood of the book, the music is calm, piano-based with just a few additions, such as James Gatti's bass and Kevin Fox's cello. And no, it's not "My peonies are gorgeous in the sunlight..," but instead putting the observations she's gained into song. Here those reflections are no longer metaphors but grown, patiently and with love and care, into something special, where art meets nature.
Posted by Bob Mersereau at 10:23 PM