MUSIC REVIEW OF THE DAY: SAMANTHA MARTIN & DELTA SUGAR - RUN TO ME 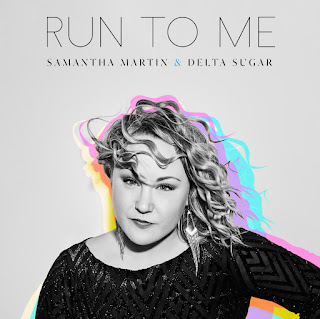 Martin's first album with Delta Sugar, 2015's Send The Nightingale, was a showcase for the group's vocal prowess and gospel influences, with not much instrumentation. It sure did the job, bringing their sound to national attention, and establishing Martin as one of the great new voices in the country. Now, the band is expanded to a full outfit for a complete soul sound. It's largely the Stax sound, plus a bit of modern production sounds similar but not copying the Daptone Records updates.

It's still the singing that really blows you away though. Good Trouble (co-written by Martin and blues favourite Suzie Vinnick) starts off with the chorus, Martin and co-vocalists Sherie Marshall and Mwansa Mwansa blending like a triumphant horn section, before Martin takes off on the verses. The arrangements, both vocal and instrumental, are fabulous throughout, with the horn section, electric piano and chugging guitars weaving around the singers, while the whole thing pulses with great energy. It's a party album for sure, until cut nine of ten, when the singers get back to the slow gospel sound on Only So Much, the church harmonies undercut by some rather secular nasty blues playing. It all wraps up with a big groove in All Night Long, all hands on deck for the funkiest number on the album, Martin singing at her grittiest. I think the Toronto-based group just redefined the term "Northern Soul".
Posted by Bob Mersereau at 9:57 PM