MUSIC REVIEW OF THE DAY: GLENN FREY - ABOVE THE CLOUDS/THE VERY BEST OF 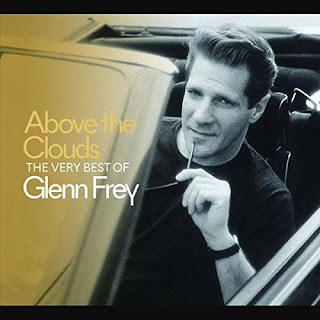 While The Eagles are one of the groups that exemplify the '70's, Glenn Frey solo is one that screams '80's, and that isn't necessarily a compliment. Not that he wasn't smart, or at least very lucky. Frey embraced the whole MTV-visuals era, getting his music exposed by major connections with film and TV soundtracks. Beverly Hills Cop? The Heat Is On. Miami Vice? You Belong To The City. Heck, they even wrote a whole episode of Miami Vice based on his Smuggler's Blues, and gave him a role. Frey's music is as iconic to the era as Eddie Murphy's grin and Don Johnson's pastels.

Ear worms they were, but wow that '80's production is as thick as maple syrup and twice as sweet. Syndrums and reverb abound, then cue the cheesy sax solo. All the western motif of The Eagles had been traded in for fast cars and skyscrapers. The ballads were better, with The One You Love hearkening back to Frey's famous vocal turns on numbers such as Lyin' Eyes and New Kid In Town. Later in the decade Frey stretched a little more, adding a pop-soul sound, Soul Searchin' not shabby but still very heavily-produced. There seemed to be some redemption happening in the early '90's when Frey went back to the movies, giving perhaps his best solo cut, Part Of Me, Part Of You, to Thelma & Louise, but it wasn't much of a hit surprisingly. And when the rift with Don Henley was patched, he went back to The Eagles and stayed there. With his death, The Eagles play on, his place now held by Vince Gill on stage, his iffy solo career compiled here. There's also a 3-CD, 1-DVD box out, which includes a live solo concert, and most interestingly, the release of Frey's pre-Eagles tracks with the group Longbranch Pennywhistle.
Posted by Bob Mersereau at 9:19 PM