MUSIC REVIEW OF THE DAY: BLACKIE AND THE RODEO KINGS - KINGS AND KINGS 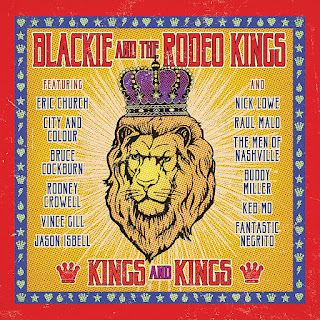 Here's the inevitable follow-up album, the obvious part two, the sequel, the no-brainer. Sometimes, you get The Godfather Part Two, sometimes it's Cannonball Run 2. Fear not Blackie fans, this one continues a fine idea.


To recap, we first had the Kings And Queens album in 2011, where the fine gentlemen of the Rodeo surrounded themselves with female singing royalty. Thanks to active friendships, and Colin Linden's large rolodex, the band was able to call on illustrious voices including Rosanne Cash, Lucinda Williams, Emmylou Harris and Serena Ryder. That worked so well, they've now flipped the gender, and brought in the guys. It's an equally impressive roll call, and once again heavy on the country and alt-country: Raul Malo, Eric Church, Rodney Crowell, Buddy Miller, Jason Isbell and Vince Gill. But Blackie has always been more about roots and branches, so there's also City and Colour (Dallas Green), Keb'Mo', their old buddy Bruce Cockburn, and a living legend to some of us, U.K. charmer Nick Lowe. Stephen Fearing, chatting backstage before a recent performance in Fredericton, mentioned that upon meeting Lowe for the session, Tom Wilson was rendered speechless for the first time in anyone's memory.


Not ones to go the easy route with cover versions of classics, or dips into their guest's catalogues, instead the Blackie songwriters do what they do, and came up with newly written tracks, which were then doled out to the best vocal matches. And as usual for their albums, each of them (Linden, Fearing, Wilson) contributed equally, each taking a lead vocal in turn. Oh, and of course, they always do a Willie P. Bennett song, in honour of their spiritual founder, and this time it's This Lonesome Feeling, featuring Gill.


Sometimes the guest would get the lead, sometimes they would share verses, and sometimes they'd just join on the chorus, again, the song dictated what was needed. The Nick Lowe-featured number turned out to be so much in his style, it's basically all him, with writer Fearing just doing some harmony. For A Woman Gets More Beautiful, Cockburn does one of his favourite things, and sings some French verses. Linden and Miller, two producers and band leaders with deep knowledge and musical integrity, trade off lines for the fun of it all on Playing By Heart, and you can feel the common bond.


These sets can be tricky though, and there are moments that probably seemed like great choices that don't quite have the results promised. Malo, one of the great voices of our day, fails to spark the somber Fearing ballad High Wire, which doesn't allow his guest to go into his full dramatic style. And many of us love the role Linden has in the country music soap Nashville, and his mentoring of the actors for their performing parts, so it seemed fun to have the "men of Nashville" join him for a cut, but it's just a bunch of indistinct voices belonging to the actors who play Deacon, Avery Barkley, Gunnar and Will. Stunt casting that, but hey, when Van Morrison invited people to sing with him, he got Michael Buble, so I guess having your friends on the record is not so bad.
Posted by Bob Mersereau at 10:22 PM