MUSIC REVIEW OF THE DAY: WILLIE NELSON - FOR THE GOOD TIMES: A TRIBUTE TO RAY PRICE 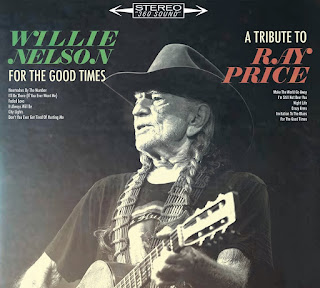 Nelson has been knocking off the pet projects like crazy of late, doing Gershwin songs, recording with pals, pretty much whatever he wants. He's 83, you know. He's just showing off now. Nelson's mentor and friend, the late, great Ray Price is the focus here, and nobody can do Price justice like Willie. Price put so much emotion into his vocals, and Nelson has that in spades, using his own killer phrasing. In fact, I'd say Willie's version here of the great, sad classic For The Good Times (written by another pal, Kristofferson) might just be the best-ever version.


Price, although a country legend, just doesn't get the respect he deserves, and isn't as celebrated as George Jones. Patsy Cline or Johnny Cash. But Price had huge hits (Crazy Arms, Heartaches By The Number, and the Nelson-written Night Life), was king of the rock precursor honky tonk, and smoothly made the transition to ballad music of the 60s, predating the countrypolitan sound. Nelson knows all this, having played bass in Price's group in the early 60s, and here he offers up a bit of both styles. He's joined by the Time Jumpers, Vince Gill's honky tonk outfit for the fast numbers, and for the ballads Nelson uses some grand strings and nifty vocal arrangements, managing to make it all seem undated. It's both a fine tribute, and another fine Willie album, to add to the oh, 200 he's already done.
Posted by Bob Mersereau at 8:14 PM