MUSIC REVIEW OF THE DAY: THE ONCE - WE WIN SOME WE LOSE 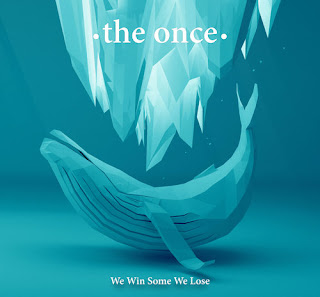 Most E.P.s are stop-gap releases, a place for a band to put a couple of extra tracks between albums, or a smaller idea between big statements.  Or, they may be used to get something new to the marketplace ahead of a tour, something to attract a little media attention in advance of shows.  On the rare occasion, something full and exciting (albeit shorter) is presented, and this offer from The Once is just such a lucky item.

While the trio have come from a folk place since starting, with a nod to modern songwriting (Leonard Cohen covers next to traditional Newfoundland songs such as The Valley of Kilbride), as they have developed as songwriters they have explored new sonic and harmonic places.  With this release, they've pushed the boundaries further than ever.  It's no surprise that ground-breaking East Coast producer Daniel Ledwell was a fine match for the songs, having already helped shepherd albums by explorers Jenn Grant and Gabrielle Papillon.  On five studio tracks here (there are also two live versions), traditional lyrics and arrangements are swapped for echoed keyboards and vibes, airy textures, and above all, grand sweeping and ringing vocals.  Lead singer Geraldine Hollett, already widely acclaimed, has never sounded so, well, heavenly.  From her double-tracked vocal on the opening track The Blood Inside Your Heart to the choral highs of Tell Me Something I Don't Know, Hollett's singing is soul-warming.  The harmonies and arrangements are just as special, and the boys join in more than normal, giving the cut Last Lemonade lots of playfulness, a merry-go-round of vocal interplay helped along by banjo, oboe and who knows what else.

Lyrically the songs (all originals these days) are equally compelling, and come from a pretty elevated emotional place.  Gonna Get Good is a growing older pep talk, "it never gets easy, but baby, it's gonna get good."  It even has unveils a piece of wisdom: "Go and free the boy you used to be/He knows all broken bottles become sand at the sea."  Not bad at all.  In We Are Love, this time the partner provides the positive words:  "I don't believe you're a liar, I never cared what you think you are."  I'm glad these tracks didn't get diluted in an attempt to fill a full album, there's so much to explore in them, that having some less-powerful work would take away from the listening experience.  The two live versions at the end add nicely as well, showing that other strength of the group, the stage.  This E.P. is as substantial as any album you'll hear any time soon
Posted by Bob Mersereau at 1:49 PM