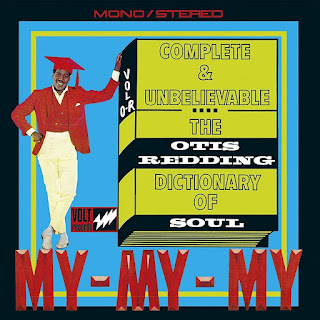 Mid-60's soul artists, for the most part, weren't making major statements with their albums as yet. Motown, James Brown, the Stax artists, they were still treating the single as the thing, and the album was more for adults. Redding however was advancing at such a pace that no matter what he was doing in the studio was treated as something special, and he certainly wasn't going to put filler on his albums. His tremendous Otis Blue: Otis Redding Sings Soul of 1965 had been packed with both hits and solid material, and showed the long player format could excite fans as well.


Early 1966's release The Soul Album was more of a patchwork, extra tracks collected to grab some more sales, but later that year came Dictionary of Soul, and this certainly was a thought-out set with hot originals, inspired covers, and even a dip into some raw blues. If you want the Stax team of backing artists Booker T and MG's, Isaac Hayes, the great Memphis Horns and Redding in firm control of it all, this is the set that rivals Otis Blue for studio punch, and Otis's live recordings for fire power.


The big cut here is Try A Little Tenderness, so completely owned now by Redding that it has long been forgotten it's a 30's composition. There's the huge, fun groove of Fa-Fa-Fa-Fa-Fa (Sad Song), irresistible and impossible to not sing along to. Following up his popular remake of The Rolling Stones' Satisfaction, this time out Redding got down with The Beatles, managing to make Day Tripper funky. Just to prove he could, he did the same to that most lily-white number, The Tennessee Waltz.


Side two was truly an album side, without hits, and not trying for them either. These were soul ballads and some country blues numbers, with Redding, Steve Cropper, Duck Dunn, Al Jackson and Booker T. getting their groove on in the studio. It's a side of music that seems so natural and effortless, that one must have thought this singer, writer, band, and label would be going for a long, long time. It was the last solo album Redding would release in his lifetime, sadly.


This reissue follows the same format used for Otis Blue's deluxe set: Two cd's, the mono mix on the first and stereo the second, plus bonus cuts on each, although none unreleased previously. Disc one has five cuts, including take one of the Try A Little Tenderness session, and other rare numbers from the sessions found on posthumous compilations. Disc two has the three big album cuts, Day Tripper, Fa-Fa-Fa-Fa-Fa, and Try A Little Tenderness recorded live, taken from his various in concert albums. All Otis is great Otis, but this ranks among the very best.
Posted by Bob Mersereau at 4:07 AM