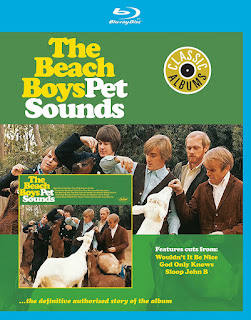 The 50th anniversary of Pet Sounds has already brought us a five-disc box set as well as a new vinyl edition of the renowned album. Now comes this fitting documentary tribute from the much-loved Classic Albums series. The British-made TV series has a great formula: Take the album and dissect it using the original master tapes, with the creators and audio engineers playing various segments and portions of the tracks to show how it all came together. That is interspersed with historical info and new interviews with the participants, plus the best-available archival footage of the group. It's so successful and well-done that usually everyone involved is willing to take part.


In this case, that means all the surviving Beach Boys, including creative mastermind Brian Wilson, remarkably animated and understandable for this set of interviews (he's known to do one-word answers when he isn't keen). His nemesis, cousin Mike Love shows up, although not in the same room, as there has been contact since the sour ending to the group's reunion tour of 2013. Lyricist Tony Asher is featured, Wrecking Crew drummer Hal Blaine, 60s record company people, publicists, journalists, and everybody agrees, Wilson was simply amazing at his key ability, creating, arranging and producing these masterful sounds. But here we get to find out how he did it, as instrument combinations are isolated (flutes, banjo, bass harmonica, you name it), and studio techniques and inventions are explained by the experts. To a person, these great pros do so with sheer awe over Wilson's talents, even after 50 years of familiarity for the music.


There's a decent amount of previously-unseen footage used, including more of the recently discovered stash of Wilson in the studio with the Wrecking Crew members from around these times. In addition to the hour-long original show, there's another half-hour of out-takes, including a lengthy section on Good Vibrations, which was begun during the Pet Sounds sessions, but left off to finish later. As Beach Boy Bruce Johnston rightly points out, imagine what the album would have been like if Good Vibrations had been on it as well. Considering it's already considered one of the top five or so albums of all time in most polls, and number one in some, it might by now have eclipsed the reputation of its usual rival, Sgt. Pepper. This is a must-have feature for hard-core fans of Pet Sounds.
Posted by Bob Mersereau at 9:27 PM