MUSIC REVIEW OF THE DAY: THE KENTUCKY HEADHUNTERS - ON SAFARI 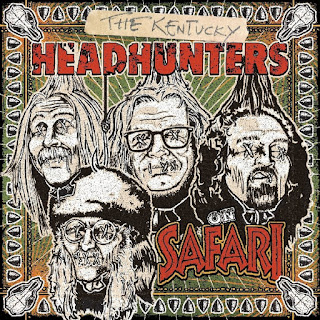 The remarkably long-lived Headhunters, whose band roots in that state go back to 1968, gravitate back and forth between rock, blues, and honky-tonk, so we'll call it roots then, but with a bit more southern bent. This time out, the rock side is winning, and there's certainly nothing wrong with that. The Brothers Young (Richard, vocals and guitar, Fred on drums) have no problem making it loud, proud and steady with nods to their geographical influences (Way Down Yonder, where we'll see "Hot 'Lanta on a Saturday night".) But they don't make it cliche Allman's/Skynyrd by any means.


This stuff is loaded with early rock/r'n'b influences, with Jukebox Full Of Blues tipping us off to their personal playlist: Suzie-Q, Blue Suede Shoes, Maybelline, the entire Chuck Berry catalogue in fact. Governors Cup caps things off with an instrumental that's half Carl Perkins, half Les Paul. Prime boogie, this.
Posted by Bob Mersereau at 3:33 PM