MUSIC REVIEW OF THE DAY: LAURENN MARCHAND - GHOSTS IN THE GARDEN 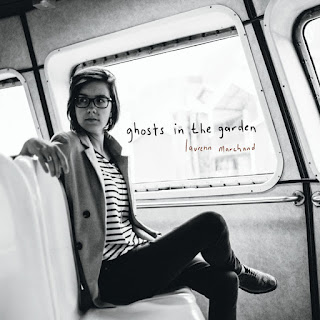 Nova Scotia singer/songwriter Laurenn Marchand is capping off a landmark year heading into the Music Nova Scotia awards with three nominations, in folk, solo and new artist recording of the year. That's for her fine debut EP, called Ghosts In The Garden. Marchand has also been singled out for her writing skills, and was one of the new artists chosen to participate this past summer in the Gordie Sampson Songwriting Camp, which has been busy pumping out the best new talent in that province, including Port Cities, Quake Matthews, Reeny Smith, Mo Kenney, etc.

Ghosts In The Garden is in that place between folk and alternative, with lots of modern production, a bunch of novel arrangement ideas, but basically strongly written songs that would work just fine on acoustic too. Opener Nighttime Mistakes is stripped down to voice, harmony, beats and single keyboard notes, digital age songcraft. Following that up is Storyteller, which shows Marchand can do old school just fine as well, a touching acoustic number with lovely stand-up bass as well, about hearing a senior's life story, very effective. That number, and Young Lover, highlight her vocals, which pack a real emotional wallop, the bend of the acoustic bass on those two tracks matching the sentiment in her voice.

She's Like The Wind takes us back to more modern sounds, full drums this time, electric bass and guitar, nothing too rowdy, the voice again the strongest instrument at first. Then the guitar builds, and we hear how Marchand would sound on the alt-rock side, which is effective as well. The title cut closes off the five-track E.P., this time a banjo-fired cut, and it nicely sums all the strengths here; another great vocal, her own strong harmony, a touch of modern with full-bodied acoustic playing, a bit of a mysterious lyric, and just the slightest touch of life's sadness.

Marchand will be showcasing at Music Nova Scotia week in Truro in November, and before that plays in Fredericton at Grimross Brewery Thursday, Oct. 20.
Posted by Bob Mersereau at 11:49 AM