MUSIC REVIEW OF THE DAY: VAN MORRISON - KEEP ME SINGING 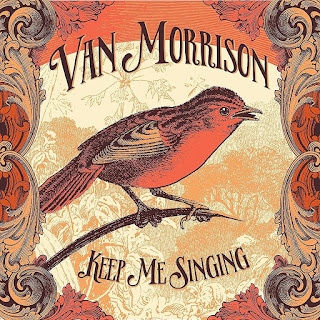 Morrison has spent most of his career at a frantic, album-a-year pace, fine in the 70s when we somehow could handle that, but by the 90s it caused him to be undervalued. There wasn't pause to consider the releases, and certainly he could have used a little more writing time. Things have slowed down considerably in the past few years, with the last album of new material 2012's Born To Sing: No Plan B, to go along with last year's questionable Duets: Reworking the Catalogue, which featured him digging out chestnuts to perform with odd choices such as Michael Buble, Joss Stone and Mick Hucknall. One expected to see his accounting firm listed as producers.


So it is better news to see this one featuring all new original material, save for one cover (Bobby Bland's Save Your Love For Me), and all produced by Morrison. He's certainly still in control as well, playing guitar, harp, sax and even drums on a few cuts. The songs are all quality, but at first I found it a little safe. They seemed to be leaning towards the Van-lite side, softer fare with piano and crooning. He seemed to taking his own advice in the title cut: "Well I'm singing, playing my songs/Doing just what I know how to do/Right here where I belong." Still doing it, but not saying much, then.


But as the set continues, it picks up, sometimes in tempo, sometimes in topic. Memory Lane sees him walking down that old spot, but turning the tour in a lyric about aging, "I'm stuck here, on Memory Lane." Holy Guardian Angel sees him return to religious imagery, in his Celtic soul style, and it's a good one. Look Beyond The Hill is even better, almost the first half a jazz instrumental with some really interesting vibes, keyboards and horns. Then comes the coup here, a blues called Going Down To Bangor, which Morrison leads off with some solid harmonica, one of his classic travel numbers, giving us a picture of that Welsh city from some time in his past. In the end, it is Morrison, doing what he knows how to do, that is just fine in the long run.
Posted by Bob Mersereau at 9:44 PM