MUSIC REVIEW OF THE DAY: LEONARD COHEN - YOU WANT IT DARKER 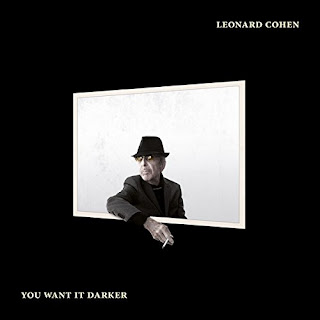 Of course we want it darker, you're Leonard Cohen. You've been a beautiful downer for six decades. How bleak can you get it? This time, Leonard's preparing for the end, signing off, giving up. He's apologizing to lost loves for old sins, and ready to meet the maker he's been talking to all these years. Whatever amends he needs to make, this is the time, while he still has some faculties. As for anyone who holds out some hope, his message is clear: "I'm leaving the table, I'm out of the game." He's gone one further than his pal Dylan, who sang "It's not dark yet, but it's getting there." It's dark in Cohen's world, and he's practically revelling in it.


But quitting? No, he still has music work to do, songs to finish. The lyrics are about the human condition, but he still wants to get them out. And he sounds just grand, in fact stronger than his last couple of albums. Part of that may be the new blood in the mix, blood kin. His son Adam produced six of the nine tracks (long-time collaborator Patrick Leonard was around for the others), and got very effective vocals, that stirring, low, half-spoken style Cohen has used since the 80s. Only this time, its settled among some new ideas, including some choirs and different backing vocals, and more strings than in the past. The album opens with choral vocals, bringing up church/synagogue settings. Steer Your Way has a gently pulsing string section driving the rhythm, and pair of violins swirling around him. It's the most remarkable of a very strong album. Since he brought it up, if this is Cohen's final word, there's lots here to digest and appreciate.
Posted by Bob Mersereau at 10:23 PM