MUSIC REVIEW OF THE DAY: BRUCE SPRINGSTEEN - CHAPTER AND VERSE 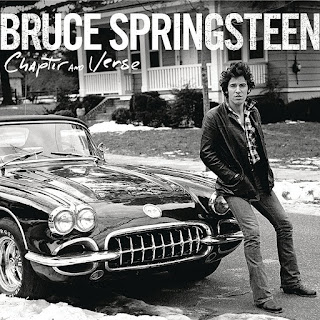 I'm definitely going have to get this Bruce Springsteen autobiography, as the Boss opens up about his depression, troubled upbringing, the price of fame, and all sorts of other interesting and personal insights. If you've read the sanctioned bio's in the past, the Dave Marsh-authored ones, it has always felt like there's been too much protection of the personal at the expense of the truth, so it will be good to see if some of that has softened with time passed on more delicate matters.


In the meantime, we get this handy companion disc to the book, songs from his life story that follow the chronology, and in some cases hold great personal significance. It's a concept that did well for Elvis Costello's book last fall, but there were two big differences. First, Costello gave himself two discs worth, a much more reasonable amount when you're talking a while live, whereas Springsteen just does one disc. Second, Costello's songs aren't as well known, the tracks aren't burned into most people's consciousness, and he could go deep into some lesser-heard albums, but Springsteen is pretty much stuck having to give us Born To Run, Born In The U.S.A., The River, important songs in his story but oh so popular already.


To make up for that, he has finally allowed the official release of some very old, pre-fame material, known to the faithful thanks to the magic of bootlegs, but hidden away for a number of reasons. Audio quality is certainly one, performance another, but hey, this is a life story, and these were important moments in those formative years, represented by five cuts. His first band, the Jersey-formed Castiles were a typical high school hop band of the mid-60s, but good enough to get gigs and a manager and record a quickly buried 45. From them we have Baby I, their hope for Top 40 fame, which features a somewhat catchy chorus, but crappy vocals, tinny sound and a group struggling with the tempo. What it does have is a guitar that stands out, with a Carl Wilson-type of solo. They were apparently better live.


That's the next track, a cover of the blues band staple You Can't Judge A Book By The Cover from a hoppin' Freehold, New Jersey club, and while the energy is there, the fidelity is sadly missing. It's remarkable that a tape of an unknown, very typical 1967 gig survived, but that's the only remarkable thing about it. Then there's a cut from band Steel Mill, Springsteen's heavy rock outfit that almost landed them a deal out in California with promoter Bill Graham. It's called He's Guilty, and was so typical of the chugging rock bands of the day, I don't know what Graham saw in them. This has better sound, as it was from a demo session they'd done for the label. Too bad it's not worth more plays.


As we get closer to fame comes Ballad Of Jesse James, by what was called The Bruce Springsteen Band, a loose group of Jersey talent that would morph into the E Street Band. It's the best of the bunch here, no surprise as it's from 1972, as he's starting to soak up the influences that would lead him to his more interesting sound and story-telling lyrics, most obviously Van Morrison. It's the cut most worth repeated listening. Finally there's one of those famous Springsteen titles among collectors, Henry Boy, a 1972-vintage track recorded at one of his acoustic demo sessions at that time. It goes along with others of that time featured on his Tracks set, and is one of his wordy numbers of that time, along the lines of Blinded By The Light, which it resembles strongly in a couple of places, and could even be a very early version before a total rewrite.


So after that interesting start, the album then goes into the basic best-of mode, with 4th of July, Asbury Park (Sandy), Badlands, Brilliant Disguise, The Rising, an interesting cross-section but still, fans will have it. I dunno, the Bruce squad will buy it of course, for the new (old) cuts, but why not go the whole route? Surely there would have been other methods to present the songs, such as live versions, re-recordings, an all-acoustic set. It just seems like a tease rather than the whole story, and I hope the book doesn't feel like that too.
Posted by Bob Mersereau at 8:13 PM