MUSIC REVIEW OF THE DAY: CATHERINE MACLELLAN - IF IT'S ALRIGHT WITH YOU: THE SONGS OF GENE MACLELLAN 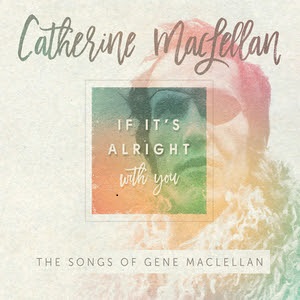 Here's a classic Canadian thing. In this Canada 150 celebration, I've seen several list of the best or most iconic Canadian songs of all time, and most of them include Snowbird up pretty high. Yet when we're asked to name the great Canadian songwriters, lots forget to put its author, Gene MacLellan, on that list. Despite having not one, but two of the biggest Canadian hits of the last century (along with the gospel/pop favourite Put Your Hand in the Hand), MacLellan's name has faded over the years, first when he focused on gospel music, and then after his death in 1995.

Let's hope this work from his Juno Award-winning daughter will help focus new attention on him, and it should. For the first decade of her own career, Catherine MacLellan stayed away from her father's work for the most part, in order to establish herself by her own terms. Since that has been well accomplished, she decided it was time to find out more about the father she lost in her teens. In addition to this album, she has written a new theatrical production by the same name, which features the stories and songs of Gene MacLellan, and she and her band will be putting on that show all summer in Charlottetown, then taking it on the road across the country.

Here she covers 13 of her father's songs, all the best-known ones and some a little more obscure but equally worthy. If anything, these songs are now better, for age and production styles. The 70's versions we know, whether by MacLellan or via the many cover versions (especially Anne Murray), had a brightness to them, and were aimed at the charts, so had lots of polish. Here, Catherine MacLellan gets to strip them back. Working in the home studio of her partner Chris Gauthier, with the gold single for Snowbird on the wall, the songs have become roots numbers, with the rural, natural world vibe they were written with initially. It's less than an hour's drive from that studio to Pownal, P.E.I., where Snowbird, The Call, Bidin' My Time and others were first composed. That quietness, that feeling of nature, and the solitary pursuit of putting one's thoughts and emotions into a song have been captured on the new collection.

"There are places on Earth where the poets give birth to the songs of the river, and where it should flow," goes the title cut, and perhaps that's as good a way as any to describe this sound. It's not simply acoustic, because there are lots of ringing electric guitar lines, strong rhythms for the drums, bits of country flavour, and even a little rock and roll. All the great melodies of the songs are still there, but they have been lifted up out of one time, and placed in a more timeless context now.

The one song that is recrafted, smartly so, is the one we know by heart, Snowbird. MacLellan does it solo, at a Wurlitzer piano, infusing it with the sadness the lyrics always suggested: "The one I love forever is untrue, and if I could you know that I would fly away with you." She also sings the lesser-known second verse, left out of the hit version by Murray, and it should have every listener feeling like they're hearing the song with new ears. The other big hit, Put Your Hand in the Hand, almost didn't make the album. It wasn't recorded back at the P.E.I. sessions, and it was only by luck it was captured. On tour in Alberta with fellow Maritimers Dave Gunning and J.P. Cormier, the trio were looking for an encore number one night, when that song was suggested. It went down so well, the next day they recorded it simply and quickly, that laid-back version the perfect antidote to too many bad church singalongs for this old Baptist.

More songs leap out; the neglected single from 1972, Lonesome River, the deft country writing of Face In The Mirror, a classic barroom number, and the haunting Faces, his reaction to the unwanted parts of fame MacLellan found himself dealing with after his initial rush of fame and riches. Especially poignant is his daughter's version of The Shilo Song, a 1976 song still brings adults to tears; I had two people separately tell me that since last Friday, one by Catherine's version, one regarding Gene's original. Gene MacLellan was a complete craftsman as a songwriter, working guitar lines and lyrics over and over until he felt they were ready. The songs themselves have always been strong and remarkable, and now they have the sound and performance they deserve as well. Let's hope a whole new audience will discover them through this milestone collection.
Posted by Bob Mersereau at 8:50 PM