MUSIC REVIEW OF THE DAY: AC NEWMAN - SHUT DOWN THE STREETS 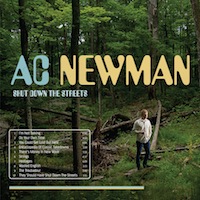 Carl Newman's bright pop comes stitched with a gentle melancholy that resembles some of the smarter Top 40 of the 70's.  There are hints of 10cc, pre-dance Bee Gees, a little ELO, some lighter prog, and edging into the Dolby 80's with synth lines.  But his productions never mimic; instead they mine a smart vein that went out of style too soon, tuneful numbers that had tap-along rhythms but were hiding ballad blues.  He lays his own lyrical twists on it all, so it's not retro, but Newman's own.

As has been the case with his solo albums, he's a little less ..what?  Alternative, I guess, then when he's fronting The New Pornographers.  The songs seem more dreamy, less edgy, rowdiness replaced with an emphasis on melody.  The most rockin' number here, Encyclopedia Of Classic Takedowns, sounds like Sloan at their most cleaned-up, and features a breezy instrumental section that drops the drums completely.  It's insanely catchy.  So's the strikingly-titled There's Money In New Wave, all harmonies and harpsichord-like keyboards.

Speaking of harmonies, Newman wisely invites his fellow Pornographer Neko Case along for the ride, and as always their voices together are a wonderful contrast.  I think it has to do with the fact hers is the stronger one, yet takes the colouring role, sort of the opposite of the norm.  He's an acoustic guitar, she's a trumpet.  Then there's all the other grand instrument choices throughout, lots of types of keys, usually in organ, harmonium, some sort of ringing setting.  And there's a lot of banjo; now, banjo has become ubiquitous and over-used post-Mumford's, but Newman's has all the twang taken out, so it's more sweet, and I love it here.  Now don't you dare ask me what any of the songs are actually about, I've been reading the lyrics and it's mostly just clues, but the images are very evocative, such as the closer They Should Have Shut Down The Streets, where something momentous has happened, but we're not let in on why our narrator and friend(s) deserve a tribute parade.  Anyway, there's lots to ponder and love, good show, A.C.
Posted by Bob Mersereau at 8:02 PM