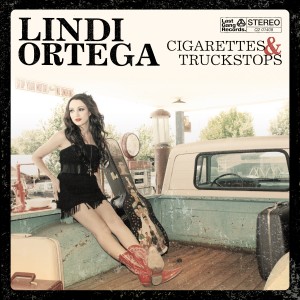 The only thing I don't like about this disc is the title; it makes it sound like another typical alt-country album by the newest singer to discover Gram Parsons and Emmylou.  This one's special.  The Toronto singer has a captivating voice with echoes of Loretta Lynn, and what sounds like a pretty natural twang, or at least well-intentioned and true to the genre.  Even better, she has a parcel of excellent and very different songs, plus a great sound supplied by producer Colin Linden.

Let's start with the sound, where Linden steps outside his usual, more roots & wood feel, and makes it classic country, with an additional layer of echo.  That latter trick means there's a slightly detached feel through the album, in a good way, like Ortega's not quite in the same time zone or even decade we are, that this is coming over the speakers to us from a different place.  But sonics aside, she is a very different character.

In The Day You Die, Ortega admits that when her man says he'll love her until that time, she starts to imagine ways for him to meet that early demise.  Don't Want To Hear It is a big rockabilly number, tough and dangerous, not so much 50's as say, later cow punk.  Murder Of Crows goes for it all:  swampy, rockabilly, huge echo, with Ortega giving her most passionate vocal on a murder ballad, one where she did the killing.  Retro sounds abound, but certainly nobody was singing about committing murder and all the bad stuff back in the day, not even tough gals like Wanda Jackson.  In Heaven Has No Vacancy, it's no room for her, at least.  In High, she's looking to medicate her pain away, with something strong.   "I just want to fly/like the clouds in the sky/I've been down for some time/so I'm gonna fly/get a little bit high."  The whole thing echoes Leon Payne's serial killer classic Psycho, and sounds like Daniel Lanois might have walked past the studio door at some point.  in Use Me, she holds out hope for an addict:  "Don't use opium/don't use LSD/don't use magic mushrooms/please don't use ecstasy/If you wanna use something, I got what you need/If you wanna get your fix/darling use me."

It should be noted none of this is played for laughs, and it never seems like a role, either.  Ortega's serious about these songs, and it's a captivating listen from start to finish.
Posted by Bob Mersereau at 5:05 PM