MUSIC REVIEW OF THE DAY: STEVE WINWOOD - ARC OF A DIVER DELUXE EDITION 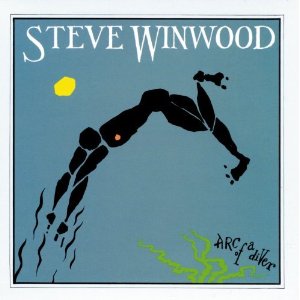 Geez, Winwood was big again for awhile there in the 80's.  This album, from the start of the decade, brought him back to star status, after a short time in the wilderness.  It was also the first time he was a star in his own right.  He'd always been a band guy, whether it was The Spencer Davis Group, Traffic, Blind Faith, Traffic again, or any of the short-term projects he'd done along the way.  A 1977 solo disc hadn't done much, but everybody knew he was the real deal, always the best singer and musician in any group.  A multi-instrumentalist, he could do it all, from keys to guitars to drums.  And of course, he had the best, most soulful voice of any (white) singer around.

So for Arc Of A Diver, he decided he would do it all.  As he admitted, he wasn't the first to play all the instruments on an album, but the guy who really liked to be with others had to chuck all that out and brave the solo world.  He probably didn't expect all the success that would come.  However, he did go for it.  A huge R'n'B and folk fan, Winwood left most of that out, instead draping on the synths and clean production, becoming a smooth, hi-tech 80's guy.  It was an odd move for the voice behind Gimme Some Lovin', or John Barleycorn Must Die, but a shrewd observation on what was needed for stardom in that era.

Honestly, it's never sat well with who he really is as a musician, although it's certainly now what's he's best known for.  The hits here, While You See A Chance, and the title cut, lead to his biggest one, Higher Love, in 1986.  While you can hear the quality of the basic melody in there, and the singing is great, oh those synths and that 80's production.  It's such a diametrically opposed synthesis:  a soulful tune, with soulless manufacturing of the track.  The album, really, has not aged well, with the rest of the cuts so much of the same style, and the hits no more than nice memories.

It would have been fun to hear demo versions, or live takes of these songs, to get a sense of their quality without the studio adornments.  Instead, the bonus tracks on the Deluxe Edition include only an edited version of Arc for the radio, an instrumental of Night Train, and a 2010 version of Spanish Dancer.  The rest of disc 2 is made up of a near-hour long BBC 2 documentary on his whole career.  It is a decent listen, although it confusingly meanders back and forth from the 60's to 80's and back again.  It is great to hear his brother Muff, and old band mates weigh in.  Really though, the best he's been of late has been getting back into the R'n'B he was born to play, touring with old pal Eric Clapton, and showing what a giant he really is.  Arc Of A Diver only hints at his true calling.
Posted by Bob Mersereau at 5:43 PM