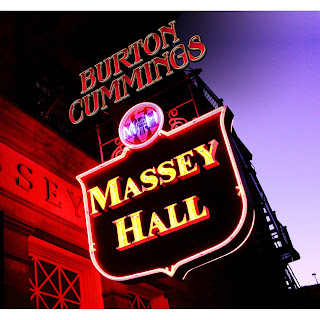 I can't think of another situation like that of Cummings and his once, and still occasional band mate Randy Bachman.  Usually, when you have a classic hit-making band like The Guess Who, the sum is always greater than the parts.  Yet when you look at their respective careers, each has done wonderfully with, or without the other.  And even today, both do a great job on their own.  Bachman's recent reunion with Fred Turner was a grand return to the BTO classics.  When the duo has joined up over the past decade, once as The Guess Who, and a few times as Bachman-Cummings, it's an excellent show.  Cummings last solo album was very strong; now comes this document of live shows from 2010 and 2011, and it proves he has just as powerful a set list, and performance, by himself.

It's hit after hit after hit.  As the lead singer for all them, Cummings has the strong 70's material to draw on, songs you normally don't hear a lot of, since the late 60's cuts get more attention these days.  Aside from the relative lightweight Clap For The Wolfman (still, rather catchy), there's real quality to Star Baby, Albert Flasher, Running Back To Saskatoon, and even Guns Guns Guns is a good surprise here.  Cummings also represents his solo hits well.  Stand Tall is a little soft, but what a great vocal.  I'm Scared comes over very well, and Timeless Love is an underrated gem.

He also has a crack band with him, in the past referred to as The Carpet Frogs, and featuring Ron Sexsmith regular Tim Bovaconti on lead guitar.  And Cummings hasn't lost a note in range, somehow still exactly the same tremendous singer he's been since the start.  Speaking of which, all those favourites are here as well:  These Eyes, Undun, Laughing, No Sugar Tonight/New Mother Nature, and of course, American Woman.  Never once does Cummings sound like he's going through the motions on these nearly fifty-year-old hits, getting close to half the age of the venerable hall the shows come from.  There are only two cuts from that most recent disc, Above The Ground, but they sound really good here, and I would happily go see those show live.
Posted by Bob Mersereau at 7:34 PM