MUSIC REVIEW OF THE DAY: IRIS DEMENT - SING THE DELTA 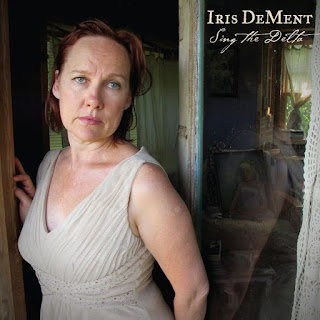 An old parlour piano starts the album off, soon joined by Dement's oh-so-rural, classic voice, just like she was singing to you from your great-grandmother's living room in the 40's.  Nobody has ever sounded so Appalachian, at least in the last 40 years.  It's a voice that aches with such sadness, such personal hurt, channeling what it must have been like for those people living in grinding poverty, their only hope found in a deep religious conviction, one based in fear of damnation as much as the knowledge of salvation.  Well, I don't have a clue how much of that she knows, feels, or is trying to emote, but that's the source I imagine.

Dement's been largely silent for several years, after releasing a trio of albums in the 90's that established her as one of the dominate voices of the new Americana, as well as one of the most stunning writers of the day.  I've missed her.  She released a gospel album eight years back, did some film work, helped out her mentor John Prine, but hasn't released an original album in 16 years.  The spark wasn't there, she's said.  Thank you-know-who it came flowing back last year.  The title track here is a tribute to the south, the music and feeling she knows from growing up in Arkansas.  It's half soul, half country, a slowed-down Stax number with mournful horns, Dement finding a little Etta James somewhere.  There are all her familiar themes; strong family ties (she's the youngest of 14 kids), strong values, and religion.  Except that Dement has never feared strong examination of that faith she grew up with.  The questions she asks are the ones that are scariest for those who were taught never to question.  She states it flat-out at one point, "I don't even know if I believe in God."  Most striking is the story found in The Night I Learned How Not To Pray.  The singer watches as her baby brother accidentally falls down the stairs, suffering a serious head injury.  As her parents rush the child to the hospital, she falls on the floor to pray, but the baby dies.  Her faith is shaken, and a lifetime of doubt follows.  Clearly, this isn't country-gospel for mainstream America, although it should be.  Dement is fearless in the way she tackles these questions in songs.

Nobody has sung quite so well about home in ages either.  It's almost like she's taken Merle Haggard's Sing Me Back Home and created an entire genre around it.  Makin' My Way Back Home evokes the sweet feeling of walking back in a childhood house, a beloved place, for the first time in many years.  Fathers and mothers show up in these spots and songs, flawed but wise characters, such as Mama Was Always Tellin' Her Truth.  In this world, clotheslines sag, household chores are unending, and so is familial love.

All these themes and sounds come together in the song There's A Whole Lot Of Heaven, one of her very best ever.  With an uptempo gospel groove, her piano combined with a rocking church organ, and her singing defiant, Dement states flatly that they don't need a prophet coming around to her small community/family, they don't even need to try to get to heaven:  "I've been saved by the blood of the people living right here/There's a whole lot of Heaven shining in this river of tears."  Wow.  Growing up Baptist myself, the lyric strikes me to the core.  And no words I could write would come close to doing justice to her celebratory vocal here.  Thank goodness Gillian Welch was around, I'm not sure how else I could have got through these sixteen dry years.
Posted by Bob Mersereau at 8:05 PM