MUSIC REVIEW OF THE DAY: JARVIS CHURCH - THE SOUL STATION: THE SONGS OF SAM COOKE 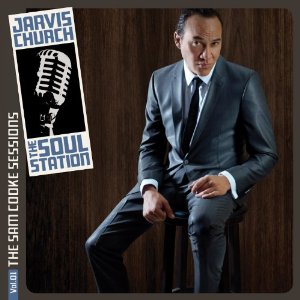 Jarvis Church is one of the best soul singers the country has produced, with his own recordings, and reaching back to his days in the Philosopher Kings.  With this new release, the first in a planned series celebrating the giants of soul, Church tackles the daunting catalogue of the original master himself, Sam Cooke.  Over the years, everybody with a soul yearning has wanted to cover Cooke, usually falling victim to various crimes.  Often they want to over-sing, wailing over lines where Cooke showed restraint is the key.  Then there are those who think the material needs to sound modern.  Cooke was pop as often as not, nice and easy and never too concerned with being hip.  Church smartly avoids these errors from start to finish.

Steal Away is a good example of that; with gospel-style singers behind him, the song clips along at a breezy pace, more of a 50's feel, not a drop of rock in it.  Bring It On Home To Me is slow on purpose, letting the words do the work, until virtuoso pianist Michael Kaeshammer comes in to tinkle sublimely.  Then Church calls for the band to "bring it down", and we really go to church, no pun intended.  This is how Cooke did it.

The songs never feel like a copycat job though.  They have their own different arrangements, totally in the right period and mood, but not like the originals.  Cupid is much richer and fuller than Cooke's, with a bigger beat and a New Orleans touch.  And Church uses the harmony singers a lot more, again giving the songs his own touch.

Church is calling his series The Soul Station, and promises similar discs looking at the works of Marvin Gaye, Smokey Robinson and Otis Redding to start.  Bring 'em on home, Jarvis, I'm digging the plan.
Posted by Bob Mersereau at 9:33 PM