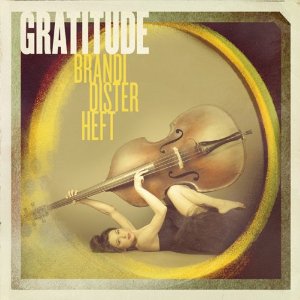 The deluge is upon us, and no, I don't mean all the rain, at least in these here Maritimes.  It's the onslaught of albums, as Christmas is still considered the most important buying time of the year, so there are a ton of new releases out.  Lots of Canadian ones, including many of our favourites, such as T. Hip and D. Krall, and lots of international as well.  Yes, yes, I'll get to them, but before everything gets swamped, I thought I'd take a step back, catch some fresh air, and review some cool Canadian jazz before it gets lost in the flood.

Vancouver's Brandi Disterheft is building a serious rep as both a bass player and composer.  On this, her third release, she gives us a wide-ranging collection of originals and covers, old school and improvisation, instrumentals and vocals, French and English, and plucked and bowed stand-up, all with a serious streak of emotion.  She leads an adept sextet that includes fellow North Van resident Renee Rosnes on piano, and an interesting mix of two horns and flute.  It's the variety that keeps us glued.

Disterheft knows her way around bebop and post-bop, composing some intricate new tunes with liveliness and fun arrangements.  Her cut Open starts with a great trumpet and sax start, then has a madly-swinging middle for Rosnes to show her chops.  When Disterheft herself moves out front, it's her and the drums, with Rosnes dropping in the odd chord, and the Oscar Peterson Trio influence comes out.  Blues For Nelson Mandela is another basic swinger, opening the disc and letting us get into the upbeat mood.

Lots of players and fans would be happy with this, and an album of it would be fine indeed, but she's got lots more up her sleeve.  If you want a standard, get ready for the bass-only version of the Gershwin's The Man I Love, in which she plays with our memory, sometimes following the melody, sometimes messing with it and us, with fantastic technique.  Compared to What is a contemporary funk social protest song, cut here as a cool version with only drums beside her  bass and vocals, a stripped-down hot soul number.  Gratitude (For David Jahns) is probably the most radical thing here, with its opening horn fanfare, and distinct classical movements with flute.  Deep, controlled drum rolls make the transition from the horns to the flutes, and in its quick three minutes, suggests the ambitious suites from Ellington and Peterson.  With all its layers and changes, this is an album that can stay a favourite for a good long time.