MUSIC REVIEW OF THE DAY: THE BEACH BOYS - FIFTY BIG ONES 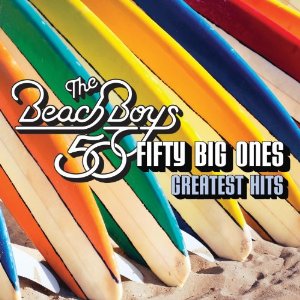 There have been roughly 10,000 Beach Boys best-of's over the years, the most famous being the #1 album from 1974, Endless Summer.  The most recent, Sounds Of Summer, was just certified triple-platinum last month in a big ceremony at the Grammy Museum, so why in the world would we need yet another?  Well, they deserve it I guess, and of course there was the whole 50th anniversary celebration and tour.  This celebration of the 50th, with 50 tracks, is an excellent collection, and if there is anyone left who needs one...

The double-disc pretty much mirrors the set list of the recent tour, which was heavy on the oldies (natch), but had a decent and somewhat surprising number of lesser-known gems for the fans of their more progressive material.  To call the album track All This Is That from the terrible-selling Carl & The Passions - So Tough album of 1972 a hit is beyond stretching the point; it wasn't even a single, nor the favourite from that disc, but it was a cool choice, and it's bound to turn some heads of those who've never heard of it.

Of course, you get the impressive parade of hits, the bulk of them from the surfin'/cars era, piled deep on disc one.  The second disc is where the Brian Wilson Is A Genius stuff flows, with the Pet Sounds tracks (Wouldn't It Be Nice, God Only Knows, etc.), the Smile era of Heroes & Villains and Surf's Up, and assorted gems such as Friends, Add Some Music To Your Day and This Whole World.  As opposed to the usual Beach Boys hits packages, this one really is inclusive of the non-hit but brilliant stuff, and it's a tip of the hat to the huge fans who have kept the flame burning for that material, as well as the Fun, Fun, Fun era.  Knowing the group's litigious nature, I'm sure the track list was put together with a battery of lawyers and accountants, but even Mike Love seems willing to acknowledge there was tremendous beauty in Brian's "ego music", as he supposedly once referred to it.

If you don't have a lot of the later Beach Boys albums, this is a pretty fine way to get a lot of the great stuff, and there's even two tracks from the new album which you probably don't have either.  It's the best of the best-of's.
Posted by Bob Mersereau at 9:43 PM