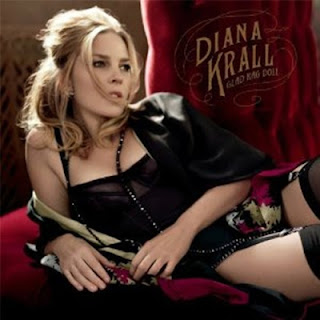 A totally different album for Krall, as she steps back in time to the 20's and 30's for everything from blues to Tin Pan Alley to barrel house numbers.  The songs are quite obscure, the stuff of 78 RPM collectors, the writers mostly faded to obscurity.  Mostly, these are what you'd call tunes;  a nice melody, a clever lyric, and a singer entertaining the crowd.  Instead of a jazz interpreter, here she's mostly a crooner.

The other major difference is that this is not a piano album.  Krall's working with the guru of old-time, T Bone Burnett, who brings his crack team of players, and vintage sound-making machine to the project.  Yes, she does play on most songs, but it's part of a larger ensemble of acoustic musicians, dominated by guitars by the unique Marc Ribot and others, stand-up bass, and interesting percussion.  It's not historical accuracy Burnett goes for; the songs are right, the instruments are the correct ones, but the people playing and singing bring their own distinct styles.  Then there's the matter of how it's all recorded, which I guess is the big Burnett secret, however he gets the big, open sound, and rumbling, haunted bass and percussion parts.  It's the sound of a semi-sleazy saloon in the daytime, with only a couple of customers, but the band doing the set anyway.

The best-known song here is also the best, but it also falls outside the format, so I'll single it out.  It's from a later period, the 50's, the Doc Pomus classic Lonely Avenue, the Ray Charles hit.  Led by the sonic adventurer Ribot, this time some very modern parts get added, as he gets atmospheric on electric, acoustic and banjo.  Burnett adds some squalling guitar too (although down in the mix), and Krall goes a little crazy on the keys, with some clanking discordant notes.  Their lonely avenue is creepy and dangerous.

Krall and Burnett are on the same mindset here; these are good songs from a very good period of music, one that should be revisited.  But not covered; this isn't about doing these songs like they used to be done.  Instead, it's about doing them with the core values intact, but as they would be done today, were the performers and writers around.   It's also nice to have Krall step outside her usual mid-century jazz zone.  Like most Burnett productions, this is its own animal, and a very interesting listen.
Posted by Bob Mersereau at 9:59 PM