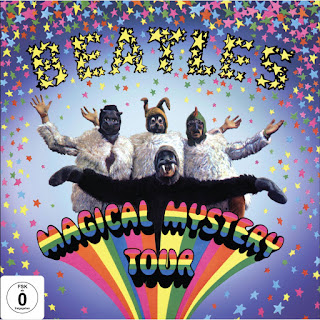 It's not the worst film ever made, but it's been vilified for years as the worst thing The Beatles did.  It certainly wasn't a roaring success, and therein lay the problem, as everything the group had done up to that point had been.  The Beatles weren't supposed to do something mediocre, and this was really just a lark, a piece of fun made as much to entertain themselves as much as the TV audience when it aired on Boxing Day, 1967 in England.  Paul, and to an extent, the others, had an interest in film, with some avant-garde ideas, and wanted to do something fast, without all the fuss of a real production.  Or a script.

Critics were brutal at the time, and apart from its songs, released as an EP in England and fleshed out to a full album in North America, the work has been largely ignored since.  Now, as with all things Beatles, it finally gets a major reissue, with plenty of bonus features, commentary, and a lovely boxed edition for those willing to shell out for deluxe treatment.  It's a super package, with the film done in both DVD and Blu-Ray, a sumptuous book, and even a reproduction of the original British vinyl double-EP, a collector's joy.  But, all the add-on features in the world can't make the original better; so the real question is, was it really that bad?

My answer is no, it's certainly not as poor as its reputation would have it.  Although I've seen lots of the parts in the past, as they've been hived for videos and documentaries along the way, I've never sat through the whole 53-minute movie.  Of course, new viewers have the luxury of not expecting much, whereas original viewers were psyched for the newest project from their heroes.  And as any Beatles fan has long known, this was largely created on the spot, with improvised scenes and bare hints of a plot.  We also know that the group had no grand ambitions for it, it was just what it was; something for British Christmas TV viewing, to put in between holiday specials and movies.  It would reflect their young, artistic drive, with splashes of surrealism, New Wave film, and psychedelia, but also have nods to old school British comedy, theatrics, and show business.

The set pieces in the film are the best moments, including the costumed performance of I Am The Walrus, and especially the closer, the ballroom dancing scene for Your Mother Should Know, with the group in white tuxedos descending a grand staircase.  Less successful was McCartney's Fool On The Hill, really just shots of him ...umm... fooling around on a hill.  They had a song called Flying they decided to use, but no footage to go with it, so they borrowed a bunch of out-takes from the classic Dr. Strangelove, cloud shots.  That's a better story that we learn from the McCartney commentary that the actual scene itself.  But hey, it must have also been cool for the audience to be introduced to these new Beatles tracks in this way, and it was a completely new and untried vehicle for pop music.  More props for them.

I kinda like the bus concept, the cast of silly characters traveling around with them, especially the odd group of character actors that felt more like a circus troupe than a theatre group.  Really, it's too bad there wasn't a script for them, as they'd chosen well, especially Ringo's rotund Aunt Jessie, her paramour Buster Bloodvessel, played by the cult hero, poet and performer Ivor Cutler (I could write a whole book on his albums, but we'll talk of him another time), and the delightful Victor Spinetti, a veteran of A Hard Day's Night, doing his nutty Army Officer routine, surely stolen by the Pythons later.  But it never gels, mostly because they simply didn't film enough, or enough with a sensible shooting script.

What truly stands out, and The Beatles had nothing to do with this, is the absolute beauty of the film.  The colours are amazing, the set design (when there is one) and the costumes stand out.  So there was some planning, and some professionalism, and these are the best moments.  Though Paul was nominally the director, and Ringo supposedly Director of Photography, a small group of real pros helped make certain scenes glorious.  It makes it even more surprising that the BBC decided to show it first in black and white that Boxing Day, and not in colour until the next week.  It might have helped the reviews.

As McCartney tells us, the fast and easy film they wanted to do made for a nightmare in the edit suite, with no proper sync track to work from.  The editing ended up to take months not days.  The commentary, and the rest of the bonus material adds greatly to our knowledge of this bit of Beatle history.  There are whole scenes that didn't make the cut, mostly with the character actors expanding their roles.  Lots of out-takes are used to create new videos to accompany Your Mother Should Know, Blue Jay Way and Fool On The Hill.  There's even a complete song and section with the band Traffic, doing their song Here We Go Round The Mulberry Bush, that was commissioned for the movie, but dropped.  McCartney's pretty open and honest in the commentary, admitting they did the segment with the Bonzo Dog Doo-Dah Band just so they could film a stripper.  And why are the women often in their underwear through the movie?  Seems they discovered if they asked actresses to take their tops off, they would.

One nice thing about all these bonus features is that it gets you into the story of the movie, and this bit of Beatles history.  It's more of an event, and lets you accept the flaws in the film more.  For all its flaws, it's still worthy a watch, and a fine package for film fans and Beatle buffs.
Posted by Bob Mersereau at 11:23 PM