MUSIC REVIEW OF THE DAY: VAN MORRISON - BORN TO SING: NO PLAN B 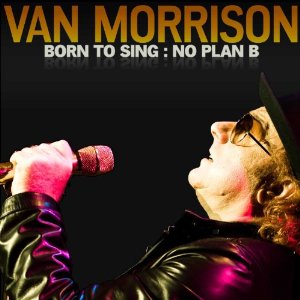 The title is a double-edged sword.  Morrison proudly swipes at those who would stand in his way (critics, professional and otherwise, one presumes), singing "Don't you think I know who my enemies are/their slip is showing and the door is ajar".  But his very sameness, making largely identical albums for the past twenty years, has seriously dented interest.  Unlike, say, Dylan and Cohen, contemporaries with whom he can surely rub shoulders, his work on a long run of retro R'n'B albums goes almost unnoticed with each release.  Not that it isn't wonderful; it's just the same wonderful I heard on the album Days Like These in 1995.

After putting out discs at a rate of once every year or two for ages, Morrison took a four-year break for this, so we're going to get lots of "a return to form" publicity for this, but of course he's never lost it.  This all sounds rather negative, doesn't it?  Well, forget that, because if you want anyone to keep on doing what he does, it's Morrison.  Rich horns, swinging beats, jazz changes, lots of room for the band to show off their chops, and of course, classic Morrison comments on fame, the music business, and the Mystic.  There's even a couple of 50's country-styled numbers, Morrison always a fan of those singers (he once walked out of Halifax's vintage vinyl store Taz Records with some Eddie Arnold platters under his arm).

The highlight for me is the heavy horn play, including lots of Morrison's own alto sax, plus trumpet, trombone and tenor.  With his voice still in fine form, its easy to glide along in the grooves, tuneful as they are, cool as ever.  Keep the lyric book handy, too.  Those bon mots come fast.  If In Money We Trust is his indictment of the current (and yet constant) greed of the one per cent, as well as the worry most of us have about finances.  "Where's God?" he asks us, "In what do you trust/When it's (money) not enough."  If anything's new, it's his focus here on greed and the world's economic focus, with theme recurring several times in the songs.  Perhaps most surprising is the closer, Educating Archie, which references, oddly, TV's Archie Bunker character:  "They filled his head with so much propaganda/Entertainment on TV and all kinds of shite/What happened to the individual/When he gave up all of his rights?"  Stay the same forever, Van.  You are definitely still an individual talent.
Posted by Bob Mersereau at 4:55 PM