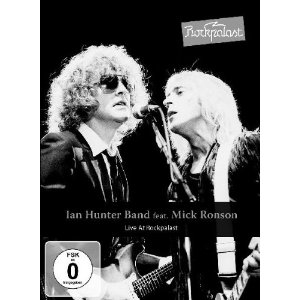 I never could figure out why Ian Hunter didn't become a bigger star.  He had great songs, including stadium-ready rockers Just Another Night, Once Bitten Twice Shy and Cleveland Rocks.  He had the whole Mott the Hoople legacy to pull from, including All The Young Dudes.  He had Mick Ronson as his best buddy and stage foil too, the original Spiders From Mars guitarist.

Seeing the band at their best from 1980, I still don't get it.  The only thing I can figure is that he wasn't flashy enough, just too working-class, with out the athleticism and drama of Springsteen. Simply, he just made rock records.  No flash, no gimmicks.  Heck, he made good ballads, too, love songs with or without irony, such as Ships, a song so sentimental Barry Manilow had a hit with it.  He was cool, just not very noticeable.

This is another in the new series of DVD's from the vaults of German television's Rockpalast series, an all-time show beamed across Europe.  It's greatly appreciated, as it features uncut live sets with a real audience.  The sound's okay, the video is a bit grainy at times, but nothing you or I can't live with.  It's far more important to get these unabridged snapshots available.

It's a classic set from the group, featuring all the songs mentioned in the first paragraph, as well as the fine All The Way From Memphis.  The nice surprise is a cover of the old Sonny Bono solo semi-hit Laugh At Me.  It was serious Sonny, and pretty good, and Hunter does a fine job.  Point of interest, it was a #1 in some Canadian markets in 1965, so maybe that's why I like it, it got implanted in my five-year old brain.  Anyway, after a spirited encore of Dudes, I'm left thinking exactly what I thought before watching this:  Why wasn't Hunter a bigger star?  That was a grand 74-minute show.

Posted by Bob Mersereau at 6:54 PM