MUSIC REVIEW OF THE DAY: FACES - STAY WITH ME ANTHOLOGY 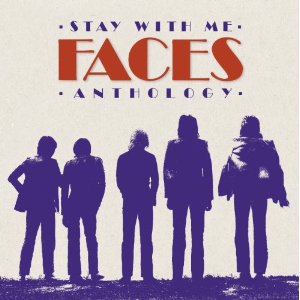 Ever wonder what Rod Stewart would have been like if he sang rock songs instead of turning everything into a wimpy ballad?  Ever tried to figure out why Ron Wood is considered an important guy even though he barely does anything in the Stones?  Just slap on the very first cut of this excellent two-disc retrospective, Stay With Me, and hear a band in full flight, every member playing a brilliant part, the best boogie you could hope for.  Sometimes they didn't have the best material, but they had a great sound, great players.  It's no wonder 35 years later people are still trying to convince Rod to take that stick out and get back on the road with this bunch.

It was far from just Ronnie and Rod.  Kenney Jones was so solid, and sounded so great, he was always way up in the mix, his pounding just a joy to follow.  Ian McLagan was the perfect old-school r' n' b keyboard guy, barroom piano or rich organ.  Ronnie Lane was melodic and the secret weapon, the other lead singer to bring the British folk into the mix.  It was never Rod's band, and that was the trouble, because it was a pittance compared to the riches awaiting him after his Atlantic Crossing.  At least we can always go back to this.

The two-disc set collects lots from the group's four studio albums, some scattered single-only tracks, and for this set they've come up with three previously-unissued live tracks from 1970.  It doesn't have the full scope of the big ol' five-disc set, Five Guys Walk Into A Bar, from the last decade, but really, The Faces need more of an introduction to more people, and this is the right price and a nice edit of their career.  Rod was still at his gravel-voiced best, the Maggie May sound, and willing to work at quite a grueling pace really, writing and recording with both the band and solo, touring to support both careers.  I have an equal love for his solo material then, it's just a pity he had to give up this sound completely.

Lane will be the surprise if you're not familiar, and his track Debris is a beautiful number, as he further moved from the pub-style music of the Small Faces (the Rod-less predecessor to this group, for you youngsters) to a more outdoors, organic setting.  There's not many groups that can claim two such distinct yet appealing voices.  Plus, this was such a group effort, with the songs co-written, cross-fertilized and seemingly democratic.  Wood and Stewart really had a copacetic writing arrangement then, riff-rockers that let Rod spit out stories in the verses, and the rest of the band go for grand excursions during the breaks.  Numbers such as Too Bad don't get a lot of talk, but sit nicely on the same shelf as better-known Stewart songs like Every Picture Tells A Story.

Did they ever have a great album?  Nope, darn solid ones, but there needed to be one or two bigger songs on each album.  Stay With Me and Ooh La La are the best-known, and best, and kick off discs 1 and 2.  There's plenty of other great stuff, don't get me wrong, just no more break-throughs.  This set should make you a fan if you are a 70's rock fan.  Those already familiar, and you desperate collectors, the live version of Robert Johnson's Love In Vain is breathtaking.
Posted by Bob Mersereau at 10:12 PM