MUSIC REVIEW OF THE DAY: THE KNACK - ROCK & ROLL IS GOOD FOR YOU (The Fieger/Averre Demos) 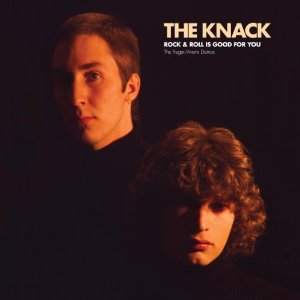 A classic case of the need to be careful what you wish for.  Seemingly out of nowhere in 1979, The Knack knocked the socks out of radio, giving them the number one song of the year with My Sharona, and selling six million copies of the band's debut, Get The Knack.  You youngsters out there, you may pooh-pooh this, but it had much the same effect as Nirvana's Smells Like Teen Spirit had, completely opening up the airwaves for alternative music.  Yes, My Sharona was considered alternative by the mainstream world.

Few bands have ever suffered the level of backlash shoved at The Knack.  The song just got played too much, and that makes any band open season for sniping critics.  Two years and two albums later, the dream collapsed in crappy sales and internal fighting, leader Doug Fieger quitting on New Year's Eve, 1981.  He'd rejoin, and lead lots of reunion appearances over the years, but usually all with the Whatever Happened To... tag.  Fieger died from cancer in 2010.

As is almost always the case, The Knack didn't come from nowhere, they came from Los Angeles, and Fieger had been working on his songs for a decade.  His late 60's band, Sky, had been under the wing of Stones producer Jimmy Miller, but couldn't break through.  By the mid-70's, Fieger was one of thousands of hard-working club musicians, shaping and shopping his songs in demo form.  After meeting guitarist Berton Averre, the pair developed a peppy, updated version of classic Top 40, certainly what would become known as power pop by the end of the decade, but this was way earlier, 1973 - 75.  After shopping and gigging for years, the pair finally found the other two band members that would make the transition in The Knack in 1978, and an overnight sensation was born.

This 16-track collection features high quality demos recorded by Fieger and Averre in two sessions in '73 and '75, fully-formed songs that wouldn't need much once they got to the studio.  You'll find some of the Get The Knack album here, including second single (and decent hit) Good Girls Don't, in a basic guitar-bass-drums take, but exactly the same song.  Actually, it's a bit better in this form, and all the songs here feel better than the over-produced, and somewhat shrill Get The Knack album.  Fieger was a good songwriter, and a bit of a visionary.  There weren't many people writing short, sharp, pop songs in those Elton John days, with disco about to knock the rock band back in the garage for a few years.  It would take Fieger and The Knack to burst the doors open again, but ultimately it would be a sacrificial and sad success, especially for the hard-working songwriter.
Posted by Bob Mersereau at 7:48 AM