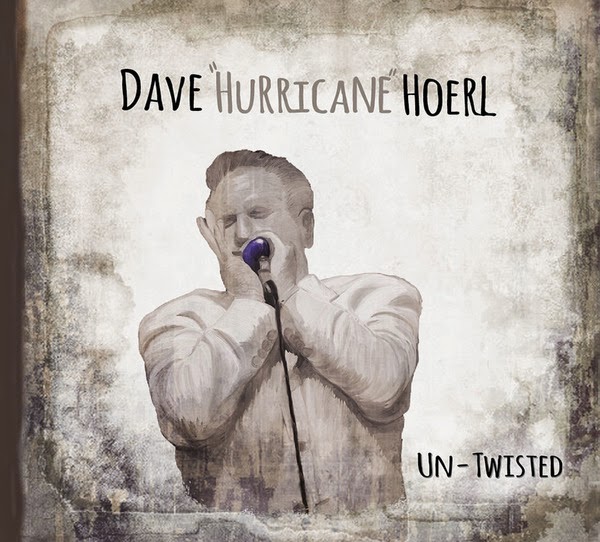 Harmonica is one of the cornerstone instruments of the blues, but one of the overused ones too.  That's because you don't need to learn it to play it.  All you need to do is put your lips together and blow.  Trouble is, too many suck too.  Tons of singers with nothing else to do have picked up the harp without learning about keys, breathing and microphone technique.  Poor harp solos are a good way to quickly tell a weak blues band from a good one.

I always trust the players who started on harp, rather than went to it as a second instrument.  For three decades, Dave Hoerl has been leading the way in Vancouver, after moving up from San Francisco.  His band The Twisters helped bring jump blues back to the forefront, and has held its own as one of the country's best.  Now, Hoerl takes the solo route for the very first time, giving us some of the usual fun The Twisters deal in, plus a few style surprises to change things up.  He's the songwriter and lead singer, but its the harmonica work that stands out, and it's such a pleasure to hear high-quality playing all the way through, songs made with the instrument in mind rather than it slapped on as an option.  Hoerl doesn't just solo, he fills in places where you'd often find guitar or piano parts.  He knows how to lead into verses with quick lines, or follow along with a couple of notes, stabbing like rhythm guitar players.  When he does blast away, it's all the more better, inventive lines that go to surprising places, not just bluster and sputtering.

As a writer, the good times are on display, whether it's creating party music (Pure & Simple Blues), a tribute to his partner (Soul Mate), and an Arabian-flavoured number, Snake Charmer.  The latter song features Hoerl's dextrous chromatic harmonica playing; that's the bigger one with the slide bar that gives the instrument all the notes of the scale, plus the well-known tone used by such fine players as Stevie Wonder, and heard on the Sesame Street theme.  Now that's a hard harmonica to master, and here Hoerl imitates horn parts and duels with sax lines.  What you have here is a fine blues album on any level, and put up another notch because there's a stand-out player involved as well.
Posted by Bob Mersereau at 6:20 PM