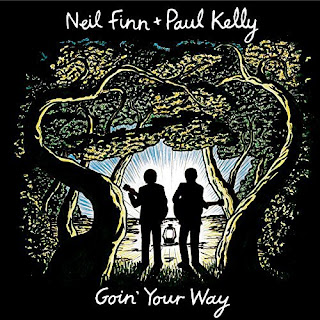 Here's a dream-team duo for folks in the Antipodes, recorded on a joint homeland tour in 2013. Of course, New Zealand's Finn has plenty of fans in these parts, but Australian Kelly remains largely unknown, his music hard to find. He's quite a different performer than Finn, more of a singer-songwriter than a pop band guy, and if he moved to the U.S., he'd live in Austin, not L.A. His songs are charming slices of life, and I think he'd gain a lot more fans with a bit more exposure.


Perhaps this set will help with that. It's a double-CD, recorded at the final show of their joint tour. What could have been an easy trip around the theatres, with each veteran doing their best-known material, turned into a real artistic partnership. Both decided before the tour to put together a whole new band, and learn each other's songs, bringing something new to the performance. As they rehearsed, new rearrangements were added, and they took to trading vocals on the other's material. Sometimes it was a verse, sometimes the whole song. Hearing Kelly do the Crowded House number Into Temptation is a completely different experience, a more solitary examination of guilt. Finn's work on Kelly's songs brings several of them into broader arrangements, harmonies and instruments opening up the melodic secrets of the songs.


They chose band members wisely, making it a family affair. Finn brought along his son Elroy to drum, while Dan Kelly, a nephew of Paul's and a well-known Australian recording artist on his own, came out on guitar and vocals. The fifth member, bass player Zoe Hauptmann, finalized a lineup of five strong singers, ready to throw away all the old arrangements. Finn really seemed to enjoy exploring the new possibilities, ripping open well-known cuts such as Private Universe, starting it as an acoustic number, adding beautiful three-part harmonies, and some haunting harmonica. He went back over his whole career, messing about with Split Enz songs (One Step Ahead, Message To My Girl), and even the one-off Finn Brothers album (Only Talking Sense). Meantime, even if you don't know Kelly now, try out To Her Door, Dumb Things and Before Too Long, all beloved hits back home. Imagine if Bob Dylan and Neil Young went on tour and did this.
Posted by Bob Mersereau at 8:28 PM