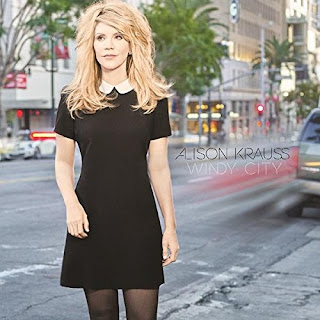 Holy Hanna! It's Alison Krauss, covering Hal Lone Pine! Lone Pine, or Hal Breau, was a big star in Maine and the Maritimes especially, and was doing well in Nashville for a bit in the 50's. He was also the dad of jazz great Lenny Breau and... oh, don't get me going here. Anyway, Lone Pine and his Mountaineers and better half, Betty Cody, did the song It's GoodBye and So Long To You first, but Krauss probably knew it better from bluegrass favourites the Osborne Brothers and Mac Wiseman. She knows her classics, and much of this album features old-school numbers.


These are vocal tunes, and certainly not the mysteriously produced kind she did on the hit album with Robert Plant. Instead, she's playing it straight for the most part, and letting her voice do the work. Taking on the very well-known Gentle On My Mind is a tough one, with Glen Campbell's version etched in our conscience, but her clear-as-a-bell delivery gives it a more haunting tone. Her delivery of Brenda Lee's hit All Alone Am I is nothing less than stunning, giving it gravitas previously unimaginable, and her work on Lee's Losing You is just as impressive.


It's an impressive list of numbers, obscure at times, surprising elsewhere, like the title cut, another Osborne Brothers number. Only her choice of You Don't Own Me sputters, as it has been done to death, and she doesn't add much to it. While the source material does feature some bluegrass numbers, really this precious little of that, as it's pretty much a classic country crooner set. It's kind of a mixed bag though, as it features ten cuts in the main body of the album, then four of them done in live versions. If you shell out a couple of more bucks for the deluxe version, you get another two studio cuts, covers of more modern hits, Till I Gain Control Again (Emmylou) and Angel Flying Too Close To The Ground (Willie). It doesn't matter, she just sounds fantastic in every format and style.
Posted by Bob Mersereau at 9:21 PM