MUSIC REVIEW OF THE DAY: SOUNDTRACK - GIMME DANGER: THE STORY OF THE STOOGES 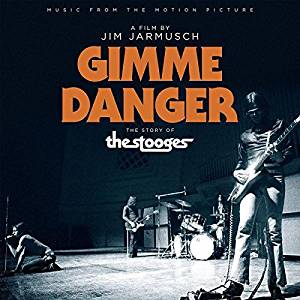 Here's great news for all of you who follow the theory that The Stooges were/are the greatest rock and roll band of all time, as filmmaker Jim Jarmusch proclaims. His documentary, which hit film festivals last year, is now out on DVD, and the soundtrack has arrived as well. I haven't seen the film yet, but it got excellent reviews, so there's that to look forward to. I'd have to say they've done a bang-up job on this music set as well.


It starts out with the band in it's prime, Iggy leading them through the title song here, a great one from Raw Power, and then some classics, the string of No Fun, I Wanna Be Your Dog and 1969. Some more album cuts follow, and then the rarer stuff kicks in. A couple of outtakes from Raw Power, I Got A Right and I'm Sick Of You could only previously be found on the four disc deluxe edition.


Fellow Detroit travelers MC5 are heard next, part of the Stooges' story for sure, with Ramblin' Rose from their debut live album Kick Out The Jams. Then come a couple of ragged recordings from Iggy's previous 60's bands, The Iguanas and the Prime Movers, the latter an audience recording of Bo Diddley's I'm A Man, which gives a good taste of the blues rawness that Iggy had in his background. The set closes with a couple more hard-to-get numbers, taken from expensive deluxe reissues of the first two Stooges albums, including a full-on freak-out called Asthma Attack.


That pretty much tells you the story, that this been put together with fans in mind, especially if you like the band but haven't gone all crazy buying box set reissues. Plus, it hasn't been messed up with bits of dialogue or later, post-'73 stuff, whether you like that or not. It sticks to the script, the original Stooges, and there's plenty to base a documentary, and a soundtrack on from that time.
Posted by Bob Mersereau at 9:12 PM