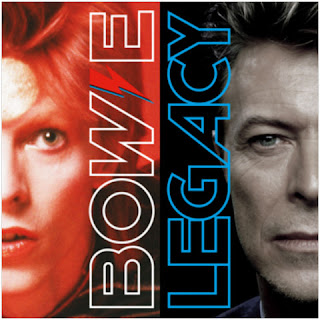 I guess it makes sense to update the official Bowie best-of with tracks from his successful, final album, last January's Blackstar. However, be careful if you bought the last greatest hits, Nothing Has Changed, which came out just two years back. It's the exact same set as the 2-CD version of that compilation, save for one difference: the track Sue (Or in a Season of Crime) has been dropped, and two numbers from Blackstar, Lazarus and I Can't Give Everything Away have been added. Well, there is one other difference, one that on the surface might seem minor but is actually quite stunning. Life On Mars? has a new mix, which highlights the wonderful string arrangement behind the Hunky Dory track, pushing it up to the same level as the piano, and moving the rock band out. It's a rare instance where the new mix eclipses the original.


You can't argue with the value-per-money, with 40 tracks here that start back at Space Oddity and pretty much cover each album, save the live ones (and thankfully, no Tin Machine). The first disc covers the glory decade of the 70's, heavy on Hunky Dory, Ziggy, all the hits. Disc two does suffer from having to find something off those 90's albums, although I'm Afraid Of Americans does seem rather prescient all of a sudden. Even the hits are a challenge at times, with the Live Aid version of Dancing In The Streets with Mick Jagger not a career high point for either. Kudos though for the inclusion of Under Pressure, the duet with Freddie Mercury more famous now than when it was released.


Disc one, though, never lets up. The Man Who Sold The World was no hit until Nirvana put it on their Unplugged show, but it certainly deserves to be here. I'll complain about two more tracks. It's a crime of omission to leave off Suffragette City in favour of Moonage Daydream from Ziggy, certainly a cut that deserves to be in his top ten, let alone top 40. And I'd rather see them drop a track in order to fit on the complete version of Young Americans, rather than use the horrible single edit of the cut, one of the worst hatchet jobs ever made of a great song. I'd rather skip it than hear it, it's that frustrating. But only a brilliant artist can make you that crazy.
Posted by Bob Mersereau at 7:41 PM