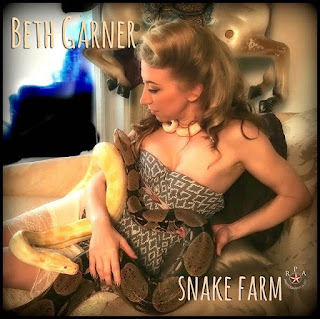 Texas-raised but Nashville-based, Garner got the best of both worlds, and ended up as a kind of Americana blues artist. She's also that rare beast, a female lead guitar and slide player as well as a twangy singer, and clever writer. So that's just about everything a roots fan could want.


This set is brief at seven cuts, but power-packed. Garner wanted to go straight blues on it, and for her that means high-energy, big groove electric numbers. While the songs are the stars, always with high-quality writing, she left herself lots of room for soloing too, including some nasty slide on the ZZ Top-ish closer, Wish I Was. While the playing fans are digging that, I'm focused on fun tunes like Backroads Freddie, about getting off the highway and looking around, and her cover of Ray Wylie Hubbard's Texas novelty, the title cut Snake Farm, apparently a true-to-life spot. A great spirit permeates this disc.
Posted by Bob Mersereau at 10:23 PM