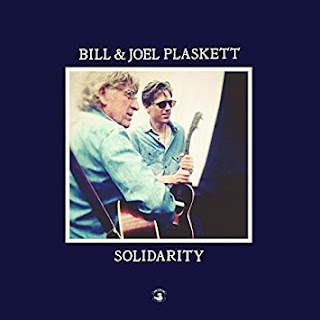 I recall sitting on a prize jury a few years back, and one of the company disparagingly referred to Joel Plaskett's music as "dad rock". That meant the kind of rock your dad would listen to, if you were in your 30's I guess, and hipper than that, music from the 60's-70's era. I guess this would make him apoplectic, as Plaskett has made his latest with his actual dad.


Fans will be familiar with the senior Plaskett, Bill, as he's recorded on previous works by his son such as Three, and done the occasional tour with him. A folk performer and songwriter himself, he's probably been as big an influence as any on his son's life, natch, but here we find out it's more than just choice of profession. Bill's a died-in-the-wool folksinger, where the words mean something, whether personal or for the people. Some of that is political for sure, and Plaskett the younger certainly has chosen to drive on the left side of that road. That's reflected here in the traditional We Have Fed You All For 1000 Years, and Joel's Blank Cheque, partially a reaction to the U.S. election campaign.


It's more of a folk album certainly, although there are a couple of rockers, where Joel utilizes his New Scotland Yard studio in Dartmouth to add on drums, bass and a handle of guest musicians. But mostly it's the two of them, Bill adding acoustic guitars and bouzouki, while handling lead vocals on a handful of cuts. That includes his own Help Me Somebody Depression Blues, and On Down The River, a favourite of Joel's that he has heard since he was a kid. Politics again comes up in Joel's Solidarity, a song he wrote for the two of them to sing that reflects connected beliefs. While there may be some sentimental reasons behind the project, that's always an element in Joel's music, and this is far more about presenting the folk music the pair have been making for years now.
Posted by Bob Mersereau at 7:43 PM