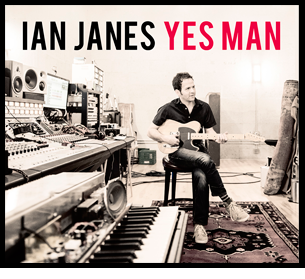 Ian Janes is one of the best songwriters from the East Coast like, ever, and we never hear enough from him. This is only his fourth album in 19 years, back when it all started with the still-killer Occasional Crush, and his first since 2010, so it's a joy just to have something new. Even better, he hasn't lost a step, and this is a major soulful bunch of new tunes.


Whether it's a funky number like the opening cut, Used, or a tearjerker like Any Fool, Janes sings with pure passion. The songs have an easy feel, but on close look are skillfully crafted, sitting somewhere between soul, pop and Americana. The colouring is bang-on, whether it's the organ that is featured on several tracks, or pedal steel, used so effectively on New Words. Broken Record has an irresistible groove, super vocal, and then out of nowhere, an awesome solo with a guitar sound I've never heard before, and that's courtesy of Janes as well.


The whole mix, production and quality is sharp, bright and exciting, and a great testament to what can be done in these parts these days. Some of it was done in Nashville, some in Pennsylvania, some in St. John's, and the rest in Nova Scotia, using both famous studio folks in the States and many local talents, and you can't tell which is what from who and where until you dig into the credits. The point being, a lot has changed around here in 20 years, and Janes is one of the reasons the quality has always been there, and getting better all the time.
Posted by Bob Mersereau at 9:15 PM