MUSIC REVIEW OF THE DAY: CHUCK PROPHET - BOBBY FULLER DIED FOR YOUR SINS 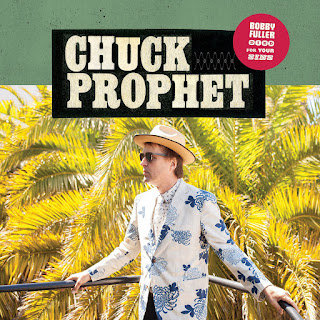 One of the great rockers left standing, the former Green On Red front man continues to blaze out in California. The title cut plays homage to the man who brought us I Fought The Law, and died in an unsolved Hollywood incident, straight out of a crime novel. Backed by a tight, edgy group, the sound is part nerves, part thrills a la Tom Petty and the Heartbreakers.


Prophet sums up what we've all been feeling the last few months with Bad Year for Rock and Roll, which begins "The Thin White Duke took a final bow/There's one more star in the heavens now." Ironically, it's an epic rocker, catchy and exciting. In The Mausoleum, another song for a late rocker, in this case Alan Vega of Suicide, is an unrelenting, driving piece of electricity, certainly in the spirit of Vega's best. Rock's annus horribilis at least proved invigorating. And if the spirited rock isn't enough, you can have fun figuring out the story behind Post-War Cinematic Dead Man Blues and If I Was Connie Britton. I'm not hazarding a guess as yet.
Posted by Bob Mersereau at 8:42 PM