MUSIC REVIEW OF THE DAY: ARCADE FIRE - THE REFLEKTOR TAPES 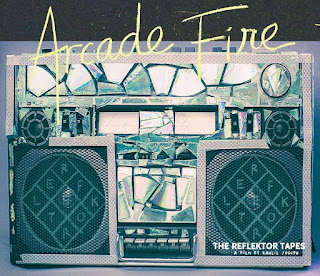 The further on Arcade Fire has moved, the more it's become a big art project, so it's no surprise the whole Reflektor album from 2013 was turned into a film as well. Directed by Kahlil Joseph, a Sundance festival award-winner, The Reflektor Tapes is the centerpiece of this two-disc set. But let's not stop there; it's a well-crammed collection that also includes promo videos, for three cuts, the TV special Here Comes The Night Time, a half-hour piece that followed the group's appearance on Saturday Night Live in 2013, and the group's interesting appearance on the 2013 YouTube Music Awards, which included a live-action story directed by Spike Jonze. And that's just disc one. Disc two is a full live concert from London from the Reflektor tour.


Now, if you don't like your music as a big art project, you'd be better off just heading to disc two, where the group proves they are a fully-functioning, highly entertaining live act. Their anthemic, feel-good songs have lots of power over an audience, and are surprisingly gimmick-free, other than the big visual element of the stage, with all its projections, colours, costumed dancers and travelling circus atmosphere. The big band on the road features a pair of Haitian percussionists, who add crucial rhythms and textures, especially to the new songs, and an absolutely bona fide part of the group's sound. Even the dance numbers ("If you're into that shit," says Win Butler, introducing We Exist) take on a stronger edge in concert than on the Reflektor album tracks.


As for the making-of film, well, it's certainly not a standard documentary. It's meant to be anything but what you'd expect, which can proof frustrating if you're looking for information instead of technique. Narrative quotes from Butler and Regine Chassagne (the other members are seen not heard from) are overlapped, sometimes faded out. The music has elements stripped away, including crowd noise. The visuals are doctored, squeezed, stuttered, all manners of treatment. In effect, the filmmaking becomes the story, instead of the action. There's precious little explanation about what was going on in the making of Reflektor. There's lots of footage involving Haiti and the musicians, and we do hear a tiny bit about Chassagne's heritage, but we never find out the grand concept of how that tied into Butler's dance music. Maybe there just wasn't that much to say, maybe it just is. If that's the case, the live show says that a lot better than the movie, which is a dull head-scratcher in comparison.
Posted by Bob Mersereau at 11:06 PM