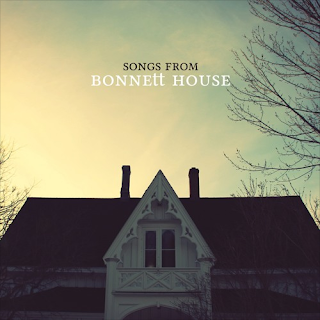 It's a story that has been told over and over; a few musicians get together to play, and almost immediately know there's magic in that combination. Those precious few first times they play together will be the best feeling they'll ever have as musicians, and they will spend the rest of their time together hoping to recapture those moments and that feeling. It happened when Nash sang for the first time with Crosby and Stills. It happened when Buckingham-Nicks teamed up with Fleetwood Mac. Heck, it probably happened when Hall met Oates.


It happened in Saint John too, in 2014. Musician pals Sandy MacKay, Clinton Charlton and Bill Preeper decided to hang out and play songs, once a week, sometimes twice. It clicked, and very quickly songs were being written. They knew those house sessions were working, and wanted to grab that very feeling, record it, preserve it, make it a group.


The place they met was called Bonnett House, and that's now the name of the trio, as well as the fruit of their labour, a debut eight song release called Songs From Bonnett House. It's an acoustic set, but not demos, these are richly produced cuts. The idea was to get the feeling of intimacy, as opposed to rawness, a good plan as the songs deserve lots of of atmosphere. There are dreamy passages, homespun melodies, comfortable harmonies and rich textures from the instruments.


There are feel-good songs, such as Fool Me Twice, relaxed and pleasing. But there's another side to the writing, heard in two cuts, a poetic lyrical approach, with a twist. Broken Birds tells a story about someone breaking both feet, going through the pain and recovery, but as odd as it might seem on paper, it's a beautiful delivery and lyric, one that defies easy description. Then there's the mystical east-meets-west tale Help You If I Can about meeting a spiritual guide on the road to enlightenment. Again, it's a very successful lyric that easily captures your full attention.


The group has a launch show coming up this week in Saint John. It's Saturday, March 4 at Sanctuary Theatre, for a measly ten bucks, at 7:30 p.m.
Posted by Bob Mersereau at 8:18 PM