MUSIC REVIEW OF THE DAY: CARMEL MIKOL - DAUGHTER OF A WORKING MAN 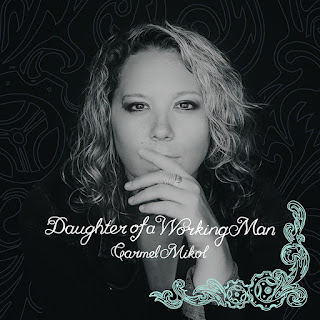 Nova Scotia's Mikol moves back and forth between folk and singer-songwriter songs, with some contemporary effects in there to add some layers. Some of the lyrics have a deliberately ancient approach, such as Spirits, with its "Fill my cup, fill my cup boys, with spirits and good luck" chorus, complete with fiddle, bodhran and bouzouki. Cape Breton Child has a more modern rock sound and lyrics but retains the folk pride, declaring "I was born and raised and I'm going to stay a Cape Breton Child."


There's still plenty of room for new sounds and current affairs though. First single Hold feels like a shout-out to the masses, advising them to hold on while lots of political, economic and authority voices are saying give up. Caroline, with its raw guitar, is about a troubled path for a renegade. It's back in time for the closing tracks, with Last Hour's Wage about hard times at home trying to scrape together enough money, while Dust To Dust returns to the connection between land and self. These new folk songs feel like old wisdom brought forward to today, when we need them again in a bad way.
Posted by Bob Mersereau at 11:17 PM