MUSIC REVIEW OF THE DAY: PHIL COOPER - A WELCOME IN THE WILD 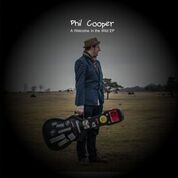 From the U.K. comes singer-songwriter Phil Cooper, a guy from the alternative pop school of things, you know, smart songs with a bunch of choice hooks in them. And hey, he's discovered Canada! Actually, he's arrived in the country not unlike his forefathers (John Cabot, Gerry and the Pacemakers, etc.), by making an introductory voyage around a few likely ports and leaving some trading goods, in the form of a Canadian-only tour E.P. called A Welcome In The Wild. Wild indeed, he's been playing such frontier towns as Toronto, Windsor and Oakville so far, but that's about to change. He'll really get to see wild Canada as he makes his way through the forest to play gigs in Fredericton and Charlottetown on the weekend.


Cooper has made his reputation on his live show, so that's a good enticement, and what I'm hearing on his six-track E.P. is certainly compelling. He doesn't downplay the comparisons to Neil Finn, and his vocal style is a match, along with his epic melodies. There's certainly a sense of grandeur to the songs here. Some fun too, with the happy Without You This Is Nothing a bouncy tribute to a muse ("Without you this is nothing more than a man on a stage on his own"). He even graces us with a new tune written just for the Canadian tour, A Welcome In The Wild: "Well the maple leaf is calling me/To the true land of the free." We'll take it, thanks for the sentiment.


Catch Cooper on his East Coast dates, at Grimross Brewing on Friday, June 2 in Fredericton, and Sunday at Baba's in Charlottetown.
Posted by Bob Mersereau at 9:06 PM