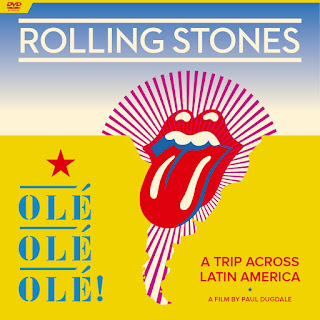 Initially, I wondered why in the world I would need this new DVD about the Stones' tour of Latin America in 2016, given that a few months ago they also released the entire show from Havana (Havana Moon) on DVD/CD, so we saw the whole tour setlist. But as soon as it started, the difference became obvious, and the importance of the film was revealed. This is a documentary the Rolling Stones in a surprisingly intimate and human way, letting us understand who they are at this juncture in their lives, especially Mick and Keith.


There's a storyline to follow, that being the visit to South America, with the possibility of a first-ever rock spectacle for Cuba that the Stones' management have to organize. There's the Cuban government to negotiate with, Cuban work crews to wrangle, an Obama visit to work around, and even a last-minute intervention from the Pope (true, that). But since we know what happened, the tension of that story is merely a device to get us from start to finish. What really happens is the carefully-built and maintained walls that are always there around the Stones are quickly broken down once they land in Argentina. It turns out there aren't just fans there, it's a whole culture of devotion, including a community that practically identifies themselves as Stones fans first, people second. The band has encountered this before, and embraces it, and sends back the love they feel. They all have these radiant smiles throughout the film as they meet fans, friends from past visits, enjoy bits of the culture, and seem completely at ease.


The filmmakers knew about this difference and went to great lengths to shoot wonderful vignettes with and without the band, meeting the fans, telling their stories and setting up surprising moments in each location. They go back to the homes of people to document their lives as well, and then follow them to unique intersections with the band. It could be the devoted fan who joins the crowd serenading Keith outside his hotel window to wake him up at 11 a.m. (he's appreciative), or the humble painter who is a friend of Ron Wood's, who embraces him as a brother artist.


With the joy of this adventure affecting the band, they offer the most compelling insights into their current relationship, and show moments of happiness, friendship and intimacy. It's clear that bygones are bygones in the supposed Keith-Mick tensions, and they even talk about that in the past tense. Jagger, normally a cynic on camera, is shown enjoying himself watching a local family of entertainers, while Keith gets up and dances with a child perhaps six years old. They even sit together for interviews. For years, when journalists interviewed the Stones, they had to do them separately. Here, just Mick and Keith perform Honky Tonk Women for the camera while talking about writing the song on a South American vacation at a remote ranch house. They even spill the beans on who the original honky tonk woman in question was. As a Stones watcher, I find this all so refreshing, after sitting through the less-than sincere interviews over the years.


Oh yeah, there's some music too, and this was a very good tour for the band, lots of strong playing from everyone. But really, it's the behind-the-scenes footage that provides the most thrills, and you should just get Havana Moon to go along with it.
Posted by Bob Mersereau at 9:32 PM