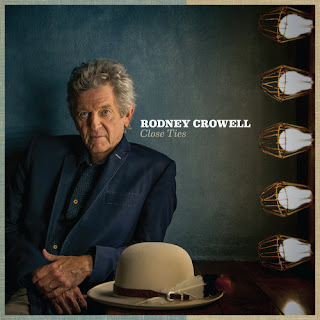 I've loved Rodney Crowell in all his phases. His early days saw him as the harmony foil to EmmyLou Harris in the original Hot Band, and the young gun songwriter of hit for Bob Seger (Shame On The Moon), Waylon Jennings (Ain't Living Long Like This) and Nitty Gritty Dirt Band (Voila! An American Dream). Then he was the hit producer of his wife Rosanne Cash's albums, and his own explosion with five #1 country hits from the album Diamonds and Dirt. The '90's weren't kind, as the hits dried up, but he reinvented himself as a more biographical writer with 2001's The Houston Kid, and has been making uniformly strong music since.


Now that's a pretty great career, but this one is something special, maybe his best in all that time. It's a highly personal collection of songs that examine both his past and present, mistakes made, great loves and friendship, and where he is today. He's not pulling any punches, and lays it on the line about his faults, vanity and stubbornness. His younger self takes the bulk of the criticism, but the current man isn't spared, although he is wiser for the experience. He looks back with regret, with love and with contrition.


That's the art, and the magic is found in the stories he's telling. Nashville 1972 is the one to smile over, as Crowell reflects on when he first moved to the city, part of a now-legendary group of up-and-comers including Townes Van Zandt, Guy and Susanna Clark, Steve Earle and more, all of whom show up. Crowell describes meeting the greats, including Tom T. Hall, Harlan Howard, Bob McDill and best of all, Willie Nelson: "There was hippies and reefer and God knows what all/I was drinking pretty hard/I played him this shitty song I wrote/and puked out in the yard."


While that one was with a smile, most have some sadness or even heart-wrenching moments. Life Without Susanna is about the lengthy illness and passing of Susanna Clark, who was the strong den mother of that bunch, but who gave up on life after Townes Van Zandt died. "As she withdrew I grew distant and judgmental, a self-sure bastard and a stubborn bitch," he admits. The emotional centerpiece is It Ain't Over Yet, a song that wraps up the past and looks to the future. It features words again about Susanna, and Guy Clark too, who has passed away as well, weaving in truths about Crowell himself, and features a guest vocal by ex-wife Cash.


Crowell has always had the ability with words, but now he has the power of age and experience, and the strength to see and reveal crucial truths.
Posted by Bob Mersereau at 12:42 AM